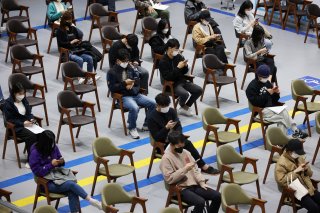 South Korea has reached its goal of vaccinating 70 percent of its fifty-two million population, but the threat of a deadly coronavirus fourth wave is still lurking, according to local health officials.

The East Asian nation, however, is still expected to relax its tight social distancing rules starting November 1 in an effort to restore daily life as it was before the nearly two-year-long pandemic. The government’s “Living With COVID-19” scheme will begin rolling out over the next four weeks as part of a broader plan to gradually end all coronavirus restrictions by February next year.

“But we must be aware that this is not the end in our virus fight, but a new beginning,” he added.

According to South Korea’s Yonhap News Agency, the government is slated to “raise the private gathering limit to ten people for the greater Seoul area and scrap business curfews on all multi-use facilities, except nightlife establishments, for four weeks starting next week.”

Currently, private gatherings are restricted to eight people in the greater Seoul area, provided that four individuals in a group are fully vaccinated. In other regions, a maximum of ten people, including six who are fully vaccinated, are allowed to gather.

As for cafes and restaurants in the greater Seoul area, they are allowed to operate until 10 p.m., while those in other regions can stay open until midnight.

In addition, authorities will institute a “vaccine pass” system that will require individuals to show a vaccination certificate or a negative test result in order to gain entry into nightlife establishments, such as bars and nightclubs, and indoor sports arenas and facilities. They did note, though, that businesses will be given a grace period of one or two weeks so that they can better adapt to the new measures.

Despite the government’s approval of going ahead with the “Living With COVID-19” scheme, the Korean Medical Association and other health experts have warned that the timing of the new strategy might fuel a rise in new coronavirus cases.

On Friday, South Korea’s new coronavirus cases stayed above 2,100 for the second consecutive day, bringing the total caseload to 360,536, according to the Korea Disease Control and Prevention Agency.

The government also noted that it will begin administering booster shots next month to individuals fifty and over, those aged between eighteen and forty-nine with underlying medical conditions, and people who already have received one dose of the Johnson & Johnson vaccine.