South Korea vs. Japan: The Trade War the World Needs to Watch 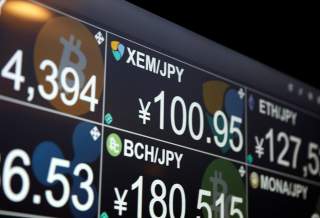 Korea was an integral part of the Japanese empire from Tokyo's annexation in 1910 until the Allies liberated it in 1945. The rapid onset of the Cold War, however, thrust South Korea into an awkward alignment with its former aggressor as the United States refashioned a now-pacifist Japan into the keystone of its Pacific strategy.

Economic progress might alleviate historical trauma, but it's unlikely to solve it. Today, South Korea and Japan are vibrant democracies that enjoy robust economies and protection under the U.S. military umbrella, yet Japan's wartime actions continue to cast a long shadow over its relations with its neighbors in Northeast Asia. South Korea's 35 years under Japanese rule, status as a fellow U.S. ally and vulnerable geopolitical position between Japan and China ensure that Japan's imperial legacy is particularly contentious on the peninsula.

This painful history has been front and center since the 2017 election of President Moon Jae In, who has taken a more confrontational stance on historical issues. Indeed, ties between the countries have become much frostier in the past two years — to the extent that Tokyo has even launched a Trump-style trade war in recent weeks. Given the deep connections between their economies and Japan's longtime trade surplus, Tokyo has numerous ways of exacting pain on South Korea's already-beleaguered industry. Meanwhile, South Korea's vociferous domestic politics will make it difficult for Moon to easily reach a compromise with Japan. And while neither the United States nor China wants the standoff to spiral out of control, there is no immediate solution on the horizon, meaning the dispute will continue to cause headaches for South Korea — as well as the customers for its industrial goods.

Korea was an integral part of the Japanese empire from Tokyo's annexation in 1910 until the Allies liberated it in 1945. The rapid onset of the Cold War, however, thrust South Korea into an awkward alignment with its former aggressor as the United States refashioned a now-pacifist Japan into the keystone of its Pacific strategy.

But through the decades, the question of Japan's wartime conduct and its legacy have remained. A now-controversial 1965 treaty normalized bilateral relations and earned South Korea the equivalent of $2.4 billion in Japanese loans, aid and property claims, yet the country's grievances are deeply rooted. They bubbled up again after South Korea transitioned fully in 1993 from authoritarian rule to a civilian government responsive to grassroots grievances toward Japan.

Since then, relations with Japan have oscillated depending on who is in charge in Seoul, with progressives adopting a more confrontational stance and conservatives de-escalating tensions in the interest of cooperation. Previous conservative South Korean President Park Geun Hye fostered cautious rapprochement with Japan out of a desire to counterbalance China's rise, forging a landmark $9.27 million deal in 2015 meant to settle the issue of "comfort women" who were victimized by Japan's wartime system of sexual slavery. The progressive Moon, by contrast, has made renegotiating that 2015 deal a banner issue for his presidency, steadily butting heads with Japan. Above all of this, the regional landscape has changed dramatically in the past decade due to China's emerging economic importance and increasing U.S. efforts to counter its rise. As South Korea and Japan's key respective economic and defense partners, neither of these Pacific titans want to see Tokyo-Seoul ties deteriorate.

Moon has presided over the gradual downturn in ties with Japan. Seeking better compensation terms, Moon has steadily undone Park's 2015 deal for Japanese compensation to comfort women, finally shuttering the South Korean group responsible for administering the funds on July 5. And while Moon and Japanese Prime Minister Shinzo Abe did agree to extend a key intelligence-sharing pact minted under Park in August 2017, he only did so due to sky-high North Korea tensions. Since then, leaks suggest South Korea has restricted the scope of such sharing to North Korean missiles, rather than broader cooperation.

There have been bright spots, most notably a trilateral China-Japan-South Korea summit in May 2018 — the first in three years — to discuss a long-awaited trade deal. However, the chances of such a summit occurring this year are extremely low. At the Group of 20 summit in Osaka in June, Abe and Moon failed to meet. And this deterioration has bled into the military sphere. Japan claimed that a South Korean destroyer locked its fire-control radar onto a P-1 patrol plane in Japan's exclusive economic zone in December 2018, while South Korea alleged that a Japanese P-3C flew dangerously close to a South Korean destroyer in the East China Sea in January. Then, in April, South Korea won a World Trade Organization case against Japan that allowed it to maintain blanket bans from 2013 on Japanese seafood from areas around the site of the Fukushima Daiichi nuclear disaster, riling Japan further.

These increasingly fraught relations have come to a head in recent weeks as South Korean courts have ordered Tokyo to compensate wartime-era laborers forced into service by the Japanese imperial government. Building on a 2012 South Korean Supreme Court ruling, local courts ordered Japanese companies Nippon Steel, Mitsubishi Heavy Industries and Nachi-Fujikoshi Corp. to pay compensation ranging from $70,000 to $90,000 to each of around two dozen South Korean wartime laborers or their surviving relatives. Although the figures are individually small, they worry Japan since estimates suggest upward of 700,000 Koreans were forced to work for Japanese companies and because South Korean courts have threatened to freeze the local assets of Japanese companies if they refuse to pay. Already, South Korean plaintiffs are preparing to file a case to seize the assets and auction them off to meet their claims.

In response to the compensation rulings, Japan has called for the two countries to establish an arbitration board as specified in Article 3 of their 1965 renormalization pact, vowing to take the issue to the International Court of Justice if South Korea declines. Tokyo wants Moon to soften his combative stance toward Japan, potentially by adopting a compromise approach to laborer compensation that could involve some sort of joint fund that would end the flurry of cases against Japanese entities.

Seoul, however, failed to take Tokyo up on its offer, prompting Japan to unveil unprecedented trade countermeasures against its neighbor on July 1. Citing eroding bilateral trust — while denying any links to the recent court cases — Japan removed three very specific chemicals critical to South Korea's semiconductor and smartphone industries from an expedited export list. As a result, fluorinated polyimide, photoresists and hydrogen fluoride are now subject to delays of up to three months on both delivery and technology transfer.

Japan, which has a $24 billion trade surplus with South Korea, has carefully calibrated the measures to hit major South Korean industries at a particularly inopportune time. In June, South Korea reported a 13.5 percent year-on-year drop in its exports — the largest since 2016 and a figure that even trailed a 9.4 percent drop in May. Semiconductor exports are also plumbing the depths — dropping 25.5 percent year-on-year in June to mark a seventh straight month of decline amid weak global demand and the U.S.-China trade war. On July 2, South Korea's Finance Ministry slashed its 2019 growth projections to between 2.4 and 2.5 percent, down 0.2 percent from initial forecasts and the lowest since 2012. At such a time, South Korea is hardly in a place to restrict imports from Japan, which is a particularly large source of machinery, plastics, electronics and chemicals that are all crucial to South Korea's industrial production.

For Moon, Japan's aggressive move comes amid weakening approval ratings, which could complicate the remainder of his tenure as president if his allies perform poorly in parliamentary elections in April 2020. According to May opinion polls, Moon had just a 45 percent approval rating (and only 30 percent for his handling of the economy and employment) — a major drop from the 83 percent rating he enjoyed a year before. It doesn't help that Moon's progressive economic policies are blamed for compounding economic issues, as a 29 percent minimum wage hike and limits to working hours have driven up corporate operating costs. And given that his stagnating overtures to North Korea provide little hope of a popularity boost, Moon will now need to weigh his popular nationalist stance toward Japan against the country's deepening economic woes. Although Moon has hinted at countermeasures, pressure from the country's all-important Chaebol conglomerates — who stand to lose much from Japanese retaliation — may be decisive.

Even worse for South Korea, the other shoe has yet to drop. Japan may next move to kick its trade war into high gear by removing South Korea from a 27-country "white list" at a hearing due July 24. Doing so would result in the imposition of an onerous national security vetting process on an untold number of South Korean purchases from Japan (the only exceptions would be food and timber) to assess whether Seoul will use them in either conventional weapons or weapons of mass destruction. In such a situation, tech transfers would fall under scrutiny as well. The measures could damage South Korea's machine tools and advanced materials imports, as well as electronics, which represent 15 percent of Japan's exports to South Korea and nearly 10 percent of South Korea's total electronics imports. In justifying its moves, Tokyo has argued through both official and unofficial channels that South Korea's export controls are weak, implying that Seoul has failed to halt the smuggling of dangerous goods to sanctioned countries such as North Korea and Iran.