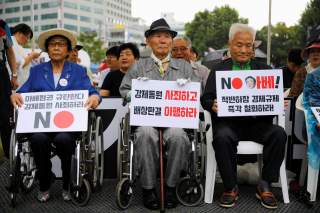 Editor's Note: This assessment is part of a series of analyses supporting Stratfor's 2020 Annual Forecast. These assessments are designed to provide more context and in-depth analysis on key developments over the next quarter and throughout the year.

Between the slings and arrows of China's global trade war with the United States, a separate battle has been brewing between the Asia-Pacific's next two largest economies: Japan and South Korea. But unlike the economic issues underpinning Beijing's fight with Washington, Tokyo and Seoul's dispute is fundamentally rooted in bitter grievances that date back to Japan's occupation of South Korea during World War II. The politically delicate nature of the dispute will continue to complicate both countries' ability — and desire — to bring a definitive end to their spat. But between the two, South Korea's more export-reliant economy stands more to lose from souring trade relations with Japan.

A Trade Dispute With Political Roots

At the heart of the dispute is South Korea's continued push for restitution for Japan's World War II-era transgressions — a perennial issue that Seoul has recently resurrected amid concerns about Japan's growing military strength. Between November 2018 and June 2019, a series of South Korean court rulings awarded compensation from Japanese companies to forced wartime laborers and their families. But instead of its usual response of stonewalling or compromise, Japan unexpectedly slapped export restrictions on chemicals key to the South Korean semiconductor and display manufacturing sectors in July, citing vague national security concerns about South Korea. Seoul then upped the ante in late August by announcing it planned to withdraw from a key intelligence-sharing agreement with Japan. South Korea's recent eleventh-hour decision to remain in that intel pact has temporarily stalled the tit-for-tat escalation of tensions. But any lasting resolution to the trade spat will still be difficult as long as South Korea continues to demand repentance for wartime offenses that Japan insists have long been resolved.

The politically sensitive nature of the dispute has made each country particularly resistant to backing down from their opposing positions. Indeed, amid rising nationalist sentiment in both countries, defiance is currently popular among Japanese and South Korean voters alike. This context has made it challenging for either side to agree to a high-profile compromise deal to ease their trade tensions, let alone bow to the pressure of their counterpart. Such a compromise would likely involve establishing a mutually agreeable mechanism (such as a joint fund) for Japan to compensate South Korea's wartime claims. But this would oblige Tokyo to accept that the wartime claims are still unresolved — a move that would run afoul of Japanese Prime Minister Shinzo Abe's more nationalist support base. And similar fears of political blowback at home will also make South Korea's president wary of channeling domestic grievances into a compensation process largely controlled by Japan.

Between the two, however, Japan has less incentive to compromise. The three chemical exports restricted by the Japanese government comprise a relatively small product line for a select few companies within the Japanese economy. Japan also knows that there's only so much more pain South Korea can inflict in terms of retaliatory pressure. While South Korea is Japan's third-largest trade partner, it's a distant third, receiving just 6 percent of Japan's total exports. Japan's top partner, China, by contrast, makes up more than 21 percent, followed by the United States at around 15 percent. But perhaps most importantly, Japan's overall economy is more insulated from export disruptions, as exports account for less than 18 percent of Japan's total gross domestic product.

South Korea, on the other hand, is more vulnerable to trade disruptions, given that nearly half (44 percent) of its GDP comes from exports. And while Japanese trade accounts for 7.5 percent of South Korea's overall trade, it's concentrated in key sectors vital to industrial production. But despite having more at stake, President Moon Jae In is still unlikely to compromise, as continued defiance toward Japan could help reassert his strength in the eyes of South Korean voters. Over the past year, Moon's administration has struggled to foster more U.S. dialogue with North Korea, as well as shield the South Korean economy from the fallout of the U.S.-China trade war. And any concessions to Japan on wartime compensation risk only further tarnishing his standing among his party's progressive, nationalist base ahead of the 2020 legislative elections.

In addition, the much more painful ramifications of the U.S.-China standoff and the broader global slowdown have so far largely muted the economic impact of the Japanese trade war in South Korea. So while it could help somewhat shore up the prospects for semiconductor exports and growth, Moon may calculate that resolving the trade tussle with Japan will do little to ameliorate South Korea's economic woes and would instead only risk hurting his government's image. This calculation, of course, could change should South Korea's economy takes an even worse turn in the coming months. If he ultimately calculates a compromise is necessary, Moon may work to center the decision on himself in an effort to spare his political camp from the blowback. There's also a chance that the opposition Conservative Party, which is more open to compromise with Japan, may take control of South Korea's legislature in 2020. But as things stand, the political risks of conceding for both Seoul and Tokyo currently outweigh the potential economic benefits of easing their trade spat.

A continuation of Japan and South Korea's trade war, therefore, remains more likely than the two sides reaching a lasting compromise. In such a prolonged dispute, Tokyo would maintain its export restriction measures as South Korea continues to advance its wartime compensation claims. Restricted access to the South Korean market, combined with the global economic slowdown, will continue to sap Japanese exports, but the overall hit on Japan's global shipments will remain comparatively small.

In Japan, individual companies will continue to bear the brunt of the blowback from sustained trade tensions. The export restrictions in July sparked ongoing consumer product boycotts in South Korea that have caused a plunge in sales of Japanese consumer products, including televisions, alcohol, retail items and computers. The companies already embroiled in the dispute will thus continue to face setbacks in the South Korean market. Still, the Japanese chemical companies whose exports to South Korea have been restricted are broadly diversified and will thus continue to fare relatively well. But if the trade war continues to bite South Korean chipmakers, Japanese businesses exporting semiconductor equipment (which makes up 11 percent of Japan's total exports to South Korea) could start suffering more losses.

Should the trade war persist into July 2020, South Korean tourists could boycott Tokyo's Summer Olympic Games. But other declines in South Korean tourism due to escalating trade tensions will likely continue to be offset by recent increases of Chinese tourism: Chinese arrivals to Japan have risen by nearly 15 percent since January, more than making up for the 13.5 percent drop in South Korean arrivals during the same period.

For South Korea, however, the size of its chipmaking sector (which makes up about one-fifth of the country's exports) and the sector's reliance on exports mean a sustained slowdown or full cutoff of Japanese products will eventually have wide-reaching effects. Of the three restricted chemicals, Japan supplies 44 percent of South Korea's total hydrogen fluoride imports and 90 percent of both its fluorinated polyimide and photoresist imports — all three of which are critical inputs for the production of chips and displays for consumer electronics. Following Tokyo's imposition of chemical restrictions in July, Japan's hydrogen fluoride exports to South Korea dropped 82 percent year on year before falling to zero in August. But despite this sharp drop-off, several factors have so far helped cushion the blow for South Korean chipmakers — the first being that Japan's export restrictions on the three chemicals amount to enhanced scrutiny and not an outright cutoff.

Japanese regulators have approved at least one shipment of each chemical since July, providing something of a lifeline — albeit an unreliable one — to South Korean manufacturers. Thanks to the chemical stockpiles many had on hand before the trade war broke out, South Korean semiconductor companies were also able to offset some of the initial reduction of imports from Japan, allowing them to still meet annual highs in chip demand between May and September. In addition, the recent drop in global semiconductor prices and subsequent drop in demand likely resulted in higher-than-necessary inventories, thus providing some relief to South Korean chipmakers. There are signs, however, that semiconductor prices could pick up in 2020 amid hopes for cooling U.S.-China trade tensions, as well as higher chip demands for Amazon and Microsoft's cloud products. And should prices recover, it could squeeze manufacturing inputs, erode South Korea's cost advantage and jeopardize timelines for product delivery.

If Tokyo and Seoul's trade spat persists, South Korean companies will largely be left at the mercy of Japanese regulators. Escalating tensions could prompt Tokyo to scrap its one-off chemical export approvals, or even broaden its trade scrutiny to new sectors, such as silicon wafers, shadow masks, image sensors and lithium-ion battery separator film. Amid these looming risks, South Korean companies will need to broaden their efforts to resort to other means to obtain the chemicals crucial to their business in 2020. SK Hynix has already begun switching to domestic sourcing for high-purity hydrogen fluoride, and Samsung is exploring a similar option. Chipmakers may also start turning to China or Japanese chemical companies with plants located outside Japan to evade the restrictions. But finding a new source for the other two products — fluorinated polyimide and photoresists — will prove no easy feat, given Japan's domination of the market for both exports.

Of all the victims of Tokyo and Seoul's prolonged trade war, South Korean semiconductors will thus face the toughest road ahead. South Korea's last-minute decision to remain in its intelligence-sharing pact has opened the door for the two sides to at least explore compromise. But even if Japan and South Korea eventually strike a deal for de-escalation, their bitter history — as well as their geopolitical rivalry — will continue to compel both countries to decouple their supply chains wherever they can.