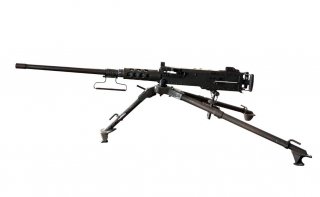 When talking about heavy machine guns, one of the first things that probably comes to mind is the American M2 .50 caliber machine gun, designed by the legendary firearms designer, John Browning. That heavy crew-served weapon made its combat debut just in time for World War I and still serves today in the United States and with a number of other militaries around the world. Though indeed well-known, there is a different heavy machine gun that is also worth looking at—that is a favorite of arms dealers, warlords, freedom fighters, and rebel groups today.

The Soviet DShK heavy machine gun and its variants are arguably one of the most widely-produced heavy machine guns ever designed. Nicknamed “Dishka,” the Soviet machine gun was introduced almost exactly twenty years after the American M2, in 1938. The DShK is chambered in the powerful 12.7x108mm cartridge, ballistically similar to the .50 BMG cartridge, though the Soviet cartridge is slightly wider with a cartridge case that is nearly a tenth longer. Like the M2, the DShK is belt-fed and has a butterfly-style trigger pulled with both thumbs. Though it has a large compensator, a large amount of recoil and muzzle flash is generated when firing, which can be seen in this video.

The DShK’s intended role is quite similar to the American M2: as a vehicle-mounted heavy machine gun with excellent range and stopping power, capable of successfully engaging a variety of unarmored or lightly armored vehicles, buildings, and low, slow-flying airplanes, and since their widespread battlefield use, helicopters.

The heavy machine gun saw widespread service with the Red Army during World War II. Postwar, however, the Soviet Union exported it to Communist allies around the globe. In particular, the DShK was used with devastating effect in an anti-aircraft role during the Vietnam War, where low and slow-flying American helicopters presented easy targets to North Vietnamese soldiers.

Despite the DShK’s more than ninety-year service life, it just won’t quit. In tandem with rugged pickup trucks or technicals, the DShK lives on as an icon of raw military power on the cheap. For the run-of-the-mill and cash-strapped warlord, mounting a DShK on the back of say, a Toyota Hilux, is the perfect solution to fighting in wide open and austere battlefields.

In this configuration, a huge amount of firepower can rapidly be brought to bear against an enemy—and just as rapidly melt away into the desert sunset. To be sure, technicals lack the armor protection of APCs or tanks, though they are much cheaper and much more accessible. Images of the Islamic State are replete with Toyota trucks filled with fighters armed to the teeth—and often with a DShK mouthed to the truck bed. You can read a deeper dive into Toyota technicals here.

Despite the DShK’s 1938 vintage, it still thrives on today’s battlefields, especially with non-state armed groups or militaries that lack the funding to equip soldiers with more modern weapons. The DShK just won’t die.