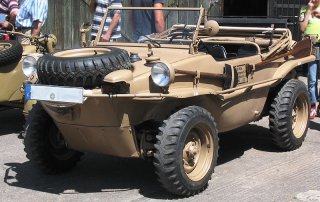 During World War II the German military developed the Schwimmwagen, a scout car that was essentially a boat with wheels that allowed it to be capable of floating in the water while a retractable water propeller allowed it to cross rivers and even lakes. By contrast, the American military developed the DUKW, a hybrid boat/truck that could drive from a cargo ship directly to dry land.

The Soviets took this concept even further with the BRDM-1 (Bronirovannaya Razvedyvatelnaya Dozornaya Mashina, literally “armored reconnaissance/patrol vehicle”). Like the Schwimmwagen, it was developed as a scout vehicle that featured an amphibious capability, but unlike the German vehicle, it was lightly armored but enough to actually provide some semblance of protection to the crew. It had a road speed of 50 miles per hour and a road range of 310 miles.

The Soviets had already developed the PT-76 amphibious light tank, which eventually became the standard reconnaissance tank employed by the Warsaw Pact. However, with a top speed of just twenty-seven miles per hour on the road, the Red Army required something speedier.

When the development of a scout vehicle began, the Red Army specified that it would be an amphibious armored vehicle that could accommodate a crew of five, however, in practice it required a crew of just three to four as it initially lacked a fixed primary or secondary weapon. Later models had weapons, including the 7.62m-millimeter SG-43 Goryunov medium machine gun or later the 12-millimeter DSkK heavy machine gun mounted in the rear position. However, the gunner had to expose himself to enemy fire when on patrol.

The BRDM-1 was introduced in 1957, but by 1962 it was already being replaced by the upgraded BRDM-2, which addressed the limitations and drawbacks of the original design. Unlike the BRDM-1, the new model featured a turret equipped with a 14.5-millimeter machine gun. As with the original version, the upgraded model featured two pairs of chain-driven belly wheels that could be lowered by the driver, which aided in the crossing of trenches and rugged terrain. It had a crew of four—including a driver, co-driver/radio operator, commander and gunner.

The BRDM-2 also featured a larger box-like hull but still retained the boat-like bow of its predecessor model. Moreover, the improved powerplant was moved to the rear of the vehicle. As a scout vehicle, it was only lightly armored—with around 14-millimeter maximum at the nose plate and as little as 5-millimeter at the upper front hull, which meant it could be penetrated by artillery fragments and even .50 caliber machine gun fire and its tires were not protected by armor. As such the BRDM-2 wasn’t meant to stick around for a fight but as a scout was meant to track the enemy, return fire if necessary and use speed and maneuverability to get out quickly.

Both the BRDM-1 and BRDM-2 were widely exported—notably to Warsaw Pact partners but also to clients across Asia and Africa. Interestingly some thirty-five countries eventually adopted the BRDM-2 including Egypt and Syria. While Israel didn’t reportedly actually purchase any from the Soviet Union, the Israel Defence Forces did capture a number in the 1973 Yom Kippur War and those were converted into an anti-tank guided missile (ATGM) launcher platform. Most have since been retired from service.

The scout cars were used by the Cuban forces and reportedly two BRDM-2s were encountered in October 1983 U.S. invasion of Grenada—one was destroyed by American forces and the second was captured. The Soviets used many of the scout cars in its invasion of Afghanistan and many were left when the Red Army departed in the late 1980s and some BRDM-2s were refurbished and remain in use today with the Afghan National Army.

The BRDM-2 was used by Iraq, and many were reportedly saw action in both the 1991 Gulf War and in 2003 during Operation Iraqi Freedom. Most recently, there are reports that the scout cars have been used by paramilitary forces on both sides in the simmering conflict in Eastern Ukraine.