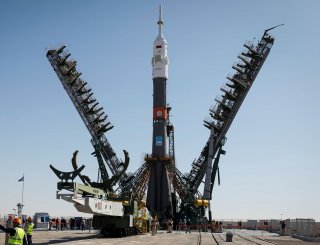 This isn’t the first time that Russia has conducted an unusual maneuver near a satellite. “The Russian satellite system used to conduct this on-orbit weapons test is the same satellite system that we raised concerns about earlier this year, when Russia maneuvered near a U.S. government satellite,” the Commander of U.S. Space Command and U.S. Space Force Chief of Space Operations General John W. “Jay” Raymond explained.

General Raymond elaborated that this test was “further evidence of Russia’s continuing efforts to develop and test space-based systems, and consistent with the Kremlin’s published military doctrine to employ weapons that hold U.S. and allied space assets at risk.”

In the previous incident, one satellite was observed separating into a pair of satellites—Cosmos 2542 and the Cosmos 2543—and trailed an observation and reconnaissance satellite operated by the United States’ secretive National Reconnaissance Office. The satellite, known as USA 224, is about the size of a bus, and is believed to have an array of high-definition cameras and other observational equipment onboard.

The Russian Ministry of Defense released a statement saying that the separating satellites were part of an experiment for assessing the condition of domestic Russian satellites—though the veracity of this statement is difficult to ascertain.

The threat that offensive satellites pose to the United States is difficult to overstate. A number of Americans rely on GPS for everything from providing directions to issuing time stamps for credit card transactions. Weather satellites transmit valuable data Earthward, as do communications satellites that are used for the mundane, like ordering a pizza, or for emergencies, like 911 calls—a reliance that Russia apparently would like to exploit.

What this means for arms control in space is difficult to plumb. On opinion expressed by Dr. Christoper Ford, the U.S. Assistant Secretary of State, was that in the zero-sum game of international relations, Russia stands to gain.

In a Space Command release, Dr. Ford explained that “this event highlights Russia’s hypocritical advocacy of outer space arms control, with which Moscow aims to restrict the capabilities of the United States while clearly having no intention of halting its own counterspace program—both ground-based anti-satellite capabilities and what would appear to be actual in-orbit anti-satellite weaponry.”

Regardless, Russia is demonstrating in no uncertain terms that it has the ability to maneuver some of its satellites close to inspect others—an ability that could very easily be used to probe other country’s satellites or destroy them.