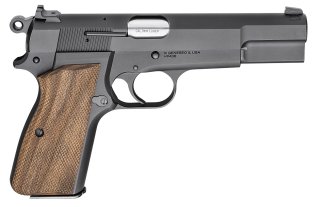 The National Rifle Association’s American Rifleman named the Springfield Armory's 9mm SA-35 as the 2022 Golden Bullseye Handgun of the Year.

The SA-35 is based on one of the most prolific and popular pistols in small arms history, the Browning P.35 High-Power, yet offers shooters a modern take on the revered classic.

Considered John Moses Browning's final design before his death in 1926, the SA-35 was actually finished by Browning's protégé in Belgium, Dieudonné Saive in 1935 for FN Herstal. Saive took Browning's key design elements and developed its double-stack, 9mm, 13-round magazine.

The Browning Hi-Power has been widely copied over the years, but the Springfield Armory's SA-35 has risen above the competition. This new take on the Browning's original design offers significant upgrades – it utilizes the appeal of the "wood and steel" era of arms manufacturing while also featuring the upgraded enhancements of today's personal defense handguns.

"We are incredibly proud that the SA-35 has been given this prestigious award," Springfield Armory CEO Dennis Reese said in a press release. "With this pistol, we have taken a revered design and updated it for today's shooters. It’s an honor for the entire team behind its development that it has been recognized in this way."

Made entirely in the United States, the SA-35 features rugged forged steel parts for added strength and durability, improved ergonomics and enhanced controls, including a factory tuned trigger, modern sights, an improved feed ramp design, and an increased fifteen-round capacity. Additionally, the choice was made to configure the SA-35 without the magazine disconnect as found in the original firearm's design. That small but notable change brought it in line with the rest of Springfield Armory's offerings and provides the ability for magazines to drop freely.

The SA-35 features a matte blue finish on all of its carbon steel parts, which is further accentuated by its walnut grips. The pistol's white dot front and Tactical Rack rear sights also offer users an enhanced sight picture that promises improved performance.

Now in their 20th year, the NRA Publications Golden Bullseye Awards was created to acknowledge the finest products available in the world of shooting sports. The winners are selected by a committee of NRA Publications staff, representing more than a century of collective experience in the shooting and hunting industry.

Reese was named the NRA's Golden Bullseye Pioneer Award in 2021, but was not able to receive the honor in person due to the cancellation of the NRA Annual Meetings and Exhibits. He will receive his award this year during the 2022 NRA Annual Meetings & Exhibits in Houston, Texas – scheduled to take place May 27 to 29, 2022.