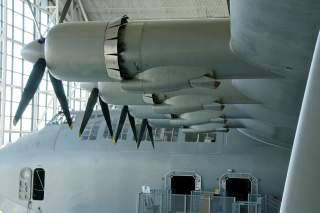 For every legendary airplane like the F-16 Viper or Il-2 Shturmovik that sees large-scale production, history is littered with dozens of promising projects that burned through budgets and deadlines only to produce a handful of prototypes. But perhaps no such failed project still looms in the public consciousness quite like the unique enormous Hughes H-4 Hercules, memorably misnamed the “Spruce Goose.”

The concept behind the H-4 arose sensibly enough from the strategic bottleneck facing the United States when it entered World War II. While the United States boasted greater industrial capacity than the Axis powers combined, it needed to transfer vehicles and millions of personnel across three thousand miles of Atlantic Ocean, or even further in the Pacific. And the Atlantic particularly was patrolled by wolf packs of Nazi submarines that reaped a fearsome toll, sinking 3,500 merchant ships and killing over 70,000 civilian and military seamen.

Industrialist Henry Kaiser played an important role in the Battle of the Atlantic by devising the Liberty Ship, a large 14,000-ton cargo ship that could be churned out by largely female workforces at shipyards in just six weeks on average. By 1943, three Liberty Ships a day were being launched a day.

But Kaiser was intrigued by the idea it might be possible to bypass the U-Boat threat by substituting the ships with planes. He partnered with the brilliant and highly eccentric millionaire Howard Hughes to devise a flying Liberty Ship.

Very few transport aircraft at that time could handle trans-Atlantic distances non-stop, however. Nor could any of their holds accommodate, say, a 33-ton M4 Sherman medium tank. Generally, the largest and farthest-flying planes of the time were huge flying boats like the Short Sunderland and PBM Mariner. These patrolled for submarines and ferried passengers and cargo over long distances, their floats allowing them to land at remote locations lacking the long, concrete runways large aircraft usually required.

Drawing on political connections rising all the way to President Roosevelt, Hughes and Kaiser received a contract from the civilian War Production Board to devise three HK-1 prototypes to be tested by 1944. However, the Pentagon was skeptical, fearing it would steal resources from its own projects. Thus, the contract fatefully stipulated that the “Strategic Transport” could not make use of strategic materials then in high demand, notably light-weight aluminum.

Therefore, Hughes and his designers focused on using a sophisticated composite plywood laminated with a resin called “Duramold.” Thin sheets of wood were bonded with three different types of glue, nailed together and cured with steam. The nails were then removed, and layers of wood filler, sealer and varnish were applied, resulting in a very smooth, shiny grey surface. The grey wood and fabric construction led to the derisive nickname “Spruce Goose,” though in fact, it was 95 percent constructed from stronger birchwood, shipped from Wisconsin. The components were assembled in Culver City, California in a hangar billed as one of the largest wooden buildings in the world.

However, Hugh’s obsessive-compulsive tendencies resulted in poor management of the project, which exceeded its two-year deadline. Kaiser dropped out in 1943, and the plane was renamed the Hughes H-4 Hercules. But Hughes was distracted by his development of the XF-11 spy plane, which resembled an enlarged P-38 Lightning. He survived a deadly flying boat accident in 1943, then nearly died when he crashed an XF-11 into Beverly Hills in 1946.

Spruce Goose wasn’t completed until two years after the end of World War II. Cut off by the government, Hughes had to complete construction of his personal albatross on his own dime. In 1946, the H-4’s components were transferred from the production facility in Culver City for assembly in a huge hangar at Long Beach, California which included a ramp into the harbor.

The wings of Howard’s behemoth measured slightly wider than a football field at 97-meters from wingtip to wingtip. Its stood eight stories high (24 meters) from its belly to the tip of its tail. The cargo plane’s ridiculous size is easier to grasp in this scale model comparison to a DC-3 medium-size airliner.

The largest aircraft ever built at the time, Spruce Goose’s sheer size meant that conventional flight controls relying on human mechanical energy for actuation could not possibly work, so Hughes pioneered an oil-hydraulic control system to transmit instrument commands instead. Eight 3,000-horsepower Pratt & Whitney Double Wasp Major R-4360 engines theoretically allowed the 125-ton (empty!) aircraft to attain a passable maximum speed of around 200 miles per hour. It could manage a trans-Atlantic hop with its range of 3,500 miles.

Its capacious hold supposedly boasted the capacity to lift a battalion of 750 troops, or two 33-ton Sherman tanks or railroad cars. But many doubted the leviathan could lift off from the water even with its hold empty. In August 1947, Hughes was summoned by Congres to explain why there were still no flying aircraft five years and $22 million in taxpayer funding later. However, Howard counterattacked his chief critic, Maine Senator Own Brewster, pointing out his ties to Hughes’s commercial rival Pan Am.

He then vowed on camera: “Now, I put the sweat of my life into this thing. I have my reputation all rolled up in it and I have stated several times that if it’s a failure, I’ll probably leave this country and never come back. And I mean it.”

In between Senate hearings, he accelerated work on the H-4 to prove that his monster-plane actually could fly. On November 1, 1947, Spruce Goose was moved into the harbor on Long Beach. The following day, Howard Hughes personally took the controls of the plane for taxi tests. Accompanying him were a copilot, two flight engineers, another eighteen crew, and fourteen journalists and industry observers.

Hughes twice taxied the hulking aircraft around the bay as thousands looked on. Then on the third trial, he increased to speeds barely above 100 knots, and the giant aircraft lifted 70 feet above the water. Despite significant tail vibration for the roughly thirty-seconds of flight, Hughes brought the Goose back down for a smooth landing.

You can see the moment brought to life in this tense scene from the Martin Scorsese film The Aviator, or see actual footage of the event here.

It was Spruce Goose’s only flight. While Hughes’s motives for the grounding are subject to speculation, practically speaking there was no post-war demand, nor shortage of aluminum, to justify the expensive wooden mega-transport. Additional development was brought to a halt in 1952.

Still, in his final decades, Hughes spent exorbitant sums maintaining an aircraft he never attempted to fly again. After his death, Spruce Goose was purchased from the government and served as an attraction at Long Beach before being sold off by the Walt Disney company. In 1993, it was moved to its current home in the Evergreen Aviation Museum in McMinnville, Oregon where it can be seen fully-assembled on display.

Despite its exceptionally brief flight career, Spruce Goose helped pioneer aviation design technologies, some of which appeared in later aircraft that were longer and/or heavier, such as the 747 Jumbo jet, the Antonov An-124 and the C-5 Galaxy.

Still, no aircraft has exceeded the H-4’s wingspan. The high demand for capabilities of the world’s only six-engine ultra-heavy An-225 transport suggests that the thinking behind the H-4 was ahead of its time.