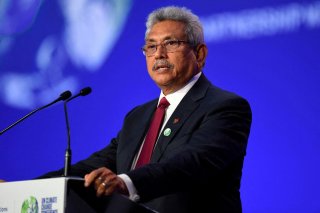 Former Sri Lankan president Gotabaya Rajapaksa, who was dramatically forced from office in July after thousands of protesters stormed his official residence and other government buildings, arrived in Thailand on Thursday night for a temporary stay before entering asylum in a third country, according to the Singapore-based Straits Times.

Rajapaksa and his wife reportedly arrived at Bangkok’s Don Mueang International Airport and departed roughly half an hour later to an uncertain destination.

Thai officials confirmed that they had allowed him to enter the country temporarily at the request of the Sri Lankan government. Thai prime minister Prayut Chan-ocha, who has governed the country since taking power in a 2014 military coup, indicated that Thailand would take Rajapaksa in for “humanitarian reasons,” but would not give him asylum, as he indicated that he would seek it elsewhere. Chan-ocha added that Rajapaksa would not take part in any political activity while in Thailand.

A spokesman for Thailand’s foreign ministry later reiterated Rajapaksa’s statement, claiming that the former president’s stay in Thailand was “temporary in nature, with the aim of onward travel” and noting that “no political asylum ha[d] been sought.” Sri Lankan citizens are allowed to remain in Thailand visa-free for ninety days.

Thailand is the third country Rajapaksa has visited since he fled Sri Lanka. On July 12, the president used a military aircraft to travel to the Maldives, from where he resigned from the presidency. After leaving the Maldives, the former president traveled to Singapore, but the Singaporean government indicated upon his arrival that he would not be allowed to remain longer than the normal thirty-day period, in keeping with the country’s practice of rarely granting asylum.

Rajapaksa was forced to resign the presidency after months of street protests criticizing Rajapaksa and his younger brother, former Prime Minister Mahinda Rajapaksa, for creating an economic crisis through poor economic policies. Among their other missteps, the two Rajapaksas supported an enormous tax cut for Sri Lankans in 2019, sharply curbing the country’s revenues, and banned the importation of chemical fertilizer, leading to a significant drop in Sri Lankan agricultural yields. These polices, as well as the devastation caused to Sri Lanka’s tourism industry by the Covid-19 pandemic, led to a financial meltdown in Sri Lanka, leaving the government unable to service its debts or pay for imports such as food, gasoline, and medicines.

It is not yet known where Rajapaksa intends to travel after his stay in Thailand. A close associate of the former president told AFP that he wishes to return to Sri Lanka, but his successor, President Ranil Wickremesinghe, urged him to remain outside the country for the time being due to popular anger over his leadership and exile.