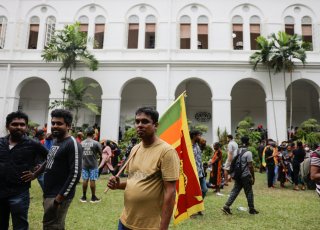 Sri Lanka’s political opposition met on Sunday for talks intended to establish a new government following the pending resignations of President Gotabaya Rajapaksa and Prime Minister Ranil Wickremesinghe—a step that the two leaders agreed to take after tens of thousands of angry protesters stormed their official residences over the weekend.

Protesters have remained in the two officials’ homes and offices since Saturday, claiming they would stay in place until the two resignations were made official. Rajapaksa’s current whereabouts are unknown, although a local news channel claimed that a Sri Lankan Navy ship evacuated him. Despite his pending resignation, the president appeared to remain at work from temporary exile, with a statement posted on his website declaring that he had ordered additional cooking gas to be distributed to the public.

Although Sri Lankan police and security forces initially tried to defend the residences from protesters with barricades and tear gas, they have not attempted to force them out since the occupation began, instead supervising activity within the residences and attempting to put out fires set by angry demonstrators. Local sources suggest that Rajapaksa’s former home has become an unusual tourist attraction, with residents of the capital city exploring the president’s palatial estate and using the facilities provided, including his pool and private library.

Because of the extraconstitutional nature of the protests, it remains unclear who will succeed Rajapaksa, who has not formally resigned yet. Ranjith Madduma Bandara, the former minister of law and order and secretary of the United People’s Force party, or SJB, claimed that the party had opened discussions with former members of Rajapaksa’s ruling coalition who had defected during the protests. Although Bandara and other opposition leaders claimed that the anti-Rajapaksa opposition could easily garner a majority in parliament, it remains to be seen whether they can establish an alternative government and in what timeframe they would do so.

Following the storming of his residence, Wickremesinghe announced that he was willing to leave office after a new government had been formed—a process that could take months. Speaker of Parliament Mahinda Yapa Abeywardena announced on the same day that Rajapaksa had agreed to step down on Wednesday. If both officials resign, Abeywardena will take over as interim president until new elections are held, according to the constitution.

Anger has built at Sri Lankan leaders since the beginning of the COVID-19 pandemic, which devastated the country’s tourism-driven economy and revealed significant financial shortcomings made worse by massive pre-pandemic tax cuts. The country’s foreign reserves have dropped to less than $2 billion, impacting its ability to pay for food, medicine, and oil imports.

After months of growing anti-government protests, Prime Minister Mahinda Rajapaksa, the president’s younger brother, resigned and was replaced with Wickremesinghe in May. During his tenure, the new prime minister has overseen marginal improvements to the country’s financial stability, enabling international fertilizer and cooking gas deliveries over the weekend.