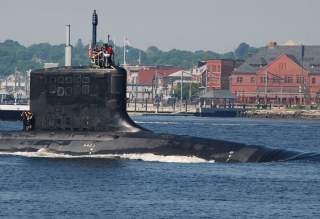 The temptation could be fierce to fudge numbers and capabilities by, say, declaring that a large unmanned submersible constitutes an adequate substitute for an SSN, or a certain fraction of an SSN, in terms of combat power. Maybe it is, maybe not. Sweeping claims must be subjected to ruthless scrutiny, keeping service chieftains honest.

An old cartoon that circulates in mathematics departments illustrates the point. It shows a student scribbling equations on the chalkboard to his left and deriving the final result, an intricate formula, to his right. In between, though, he sketches a cloud bearing the words then a miracle occurs. “I think you should be more explicit here in Step Two,” advises his professor. Submarine fleet designers should dispense with orthodoxy by all means, but they must be explicit in Step Two. Otherwise, they might assume away unpleasant realities in their haste to embrace a wondrous, new, but potentially faulty paradigm. Reality bites—eventually.

New ideas about naval architecture must undergo the same rigorous critique as the old. Show your work!

Principle #3—tailor the sub to the setting.

It’s natural to improve on what works. SSNs like the Virginia and Seawolf are proven designs, and they are Swiss Army knives, so SSN(X) designers will incline to improve on them by increments. Instead, the silent service ought to fit its new boat to U.S. maritime strategy and, in particular, to the operational environment. Happily, reading between the lines of official documents and early reporting on SSN(X), it appears that strategy is indeed impelling the process. The U.S. Navy has reoriented its endeavors from projecting power ashore to winning command of the sea. Which makes sense: after all, a fleet can’t project power ashore from the sea unless it controls the water space from which it will project power ashore. The leadership has seemingly gotten its priorities straight.

Let’s keep it that way. The fight for maritime command must take precedence—now as throughout naval history—and the undersea component must support the overall strategy. The attack in attack boat, that is, should refer to brawling with hostile subs and surface ships, not assailing land targets from an offshore sanctuary.

With regard to the setting, the nature of the operating medium—the sea—could be in flux owing to new anti-submarine warfare (ASW) technology and techniques. A few years ago, Center for Strategic and Budgetary Assessments analyst (and erstwhile submariner) Bryan Clark set tongues to wagging when he contended that new sensors and computer technology might render the oceans more or less transparent to sub hunters—and that the revolution could happen soon and abruptly. Yours truly riffed on Clark’s thesis on a number of occasions, speculating about how warfare in the depths would change if ASW forces could peer through the water with far more fidelity than today.

If subs could no longer rely on the operating medium to conceal their whereabouts, empowering them to strike and flee with impunity, then they would become prey as well as predators. I postulated that superempowered ASW wouldn’t put an end to undersea combat, but that this mode of battle would come to resemble air combat. How so? Sub designers and crews depend overwhelmingly on passive measures to hide from their foes. Silent-running machinery, sound-absorbent coatings on hulls, and other quieting measures damp a boat’s acoustic signature. The less sound a boat emits, the lower an enemy’s chances of detecting, tracking, and targeting it. If passive measures such as silencing no longer suffice, then subs may have to learn to employ active measures as well, much as how air forces now construct stealthy aircraft yet also deploy electromagnetic warfare—jamming, anti-radiation weaponry, and the like—to boost stealth jets’ prospects of evading detection in embattled airspace.

SSN(X) designers should entertain the likelihood that Clark’s thesis is correct in part or in whole, and that the class will have to cope with vastly more menacing surroundings during its service life than did its forebears. They should factor that worst-case analysis into the design, making it easier to adapt hardware and tactics should emerging trends make the unthinkable manifest. Studying aerial and surface warfare could help. Let’s hedge now lest events overtake the silent service later.

And lastly, it’s worth fabricating the SSN(X) for the theaters where national and military strategy say it’s destined to operate, namely the “marginal seas” that wash against the Eurasian “rimlands.” In other words, build the sub to command the waters Washington wants to command. Suppose, for example, U.S. military strategy envisions “tightening the chain”—closing Asia’s first island chain to maritime movement—to deter and apply pressure on China. American and allied submarines will spearhead such a strategy. What better platform than a torpedo- and missile-armed sub to lurk along the island chain, denying passage to Chinese surface and subsurface shipping?

That being the case, designers should ask themselves what capabilities a sub needs to execute such a mission and, as a corollary, what capabilities are superfluous for such a mission. They can consign extraneous capability to the cutting-room floor, helping the service meet the cost estimates it set forth for SSN(X) acquisitions. Maybe an island-chain submarine could be a smaller submarine—smaller than the Virginia class, let alone the Seawolf. Or maybe the new design could come in diesel-electric as well as nuclear-powered variants to hold down the expense. After all, a boat stationed in Japan or the Philippines need not remain underwater virtually forever, as a nuclear sub can, in order to patrol a strait. It can get by with shorter on-station times. Some navies install different propulsion plants in the same hull form. American yards could doubtless follow suit if the customer so directed. The question of whether the submarine force must remain all-nuclear is worth asking—and taking seriously.

Bottom line, we have time to think. Let’s unshackle ourselves from time-honored concepts, test out ideas old and new, discard the worst, and save and improve upon the best. Let’s enthrone the scientific method anew.