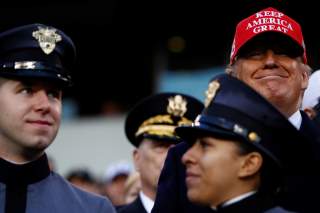 “Sadly, Congressman Van Drew’s decision to join the ranks of the Republican Party led by Donald Trump does not align with the values we brought to this job when we joined this office,” they wrote in a letter to Van Drew’s chief of staff, Allison Murphy.

The letter has signatures from Javier Gamboa, Edward Kaczmarksi, Justin M. O’Leary, Mackenzie Lucas, and Caroline Wood. They added in the letter that “Trump Republicans” are “aiding and abetting” the president as he “shreds the Constitution and tears the country apart.”

Van Drew, a moderate Democrat who opposes impeaching Trump, was reportedly considering the switch to avoid a primary challenge in his New Jersey district, which broke for the president in 2016 by five points.

He was only one of two Democrats to vote against the impeachment inquiry in October. Van Drew told Fox Business in November that several other moderate Democrats were “quietly concerned” about the impact impeachment could have on their political futures.

There are 31 House Democrats who won districts in 2018 that voted for Trump in 2016. House Democrats released two articles of impeachment for abuse of power and obstruction of Congress Tuesday against the president Dec. 10.

Van Drew’s office has not yet responded to the Daily Caller News Foundation’s request for comment.