Stalin and Hitler, Putin and Xi: How to Deal with Bad Guys? 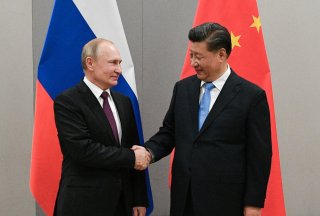 News of the Kremlin plot against Alexei Navalny along with the penetration of U.S. computer networks by Russian hackers underscores the question: How should Joe Biden respond to the growing threats posed to free peoples by the criminal regimes headed by Vladimir Putin and Xi Jinping? If the world needs Russian and Chinese cooperation to deal with climate change and other global problems, should the United States just ignore the threats posed by militant dictators to their own subjects and to international security?

Imagine Joe Biden had been U.S. president in the 1930s. How should he have responded to dark omens posted by Josef Stalin and Adolf Hitler? Given the severity of the Great Depression, many Americans welcomed purchases of U.S. goods and technology by the Soviet Union and Nazi Germany. But should they have done anything to cooperate with a Kremlin that abetted mass starvation in Ukraine and Kazakhstan? Filled its gulags with innocents, show-trialed opposition figures for treason, and killed Leon Trotsky in Mexico? Divided Eastern Europe with Hitler, invaded Finland and Poland, and annexed the Baltic states?

The signs from Germany were also ominous. The Führer ended every vestige of Weimar democracy, glorified the Big Lie (die grosse Lüge), persecuted Jews and pronounced Aryans the master race, and claimed a right to Lebensraum in the east. Having withdrawn from the League of Nations, the Nazi regime rearmed, militarized the Rhineland, tried out its dive bombers in Spain, annexed Austria and then Sudetenland, and signed a “non-aggression” treaty with Stalin.

There were no easy answers to these challenges in the 1930s, Hitler said he merely sought “equality” for Germany in troops and tanks, along with a return to the homeland of Germans in Austria and Czechoslovakia. But each gain whetted his appetite. The Western democracies had no stomach for war and lacked the will to confront evil head-on, but isolation and appeasement only deepened the dangers. Soon the entire world was at war, including the United States.

Like the actions of Stalin and Hitler in the mid-1930s, those of Vladimir Putin and Xi Jinping today appear to be limited—below the threshold of threats to world peace.

But what kind of collaboration should there be with two leaders seeking to become dictators for life? Who remove from public life or assassinate any political or business leaders who challenge their reigns? Who jail, intimidate, or kill any journalists or lawyers who might expose their abuses of power? Who labor to control all media and, in China, even the Internet? China compels even foreign communications services to help identify political dissidents.

Repression at home breeds aggression abroad. Putin generated hostility to Chechnya to win support in Russia. To foster patriotism and recover imperial glory, he used military force to annex or occupy parts of Georgia and Ukraine. He mobilizes economic levers, military threats, and fifth column subversion against former Soviet republics. Russia has used cyberwar to paralyze a deeply wired Estonia, foment discord in Europe, influence U.S. elections, and spawn distrust in democratic politics. Russian hackers penetrate the computer networks on which the U.S. government and many businesses depend. Russian planes and ships approach U.S. shores from Alaska to Florida. The Kremlin is also the prime suspect behind the electronic attacks sickening U.S. diplomats in Cuba and elsewhere. Moscow may have blackmailed Donald Trump to keep him subservient. Moscow has made doping in sports a science.

China’s record is no better. Xi Jinping steadily tightens his totalitarian dictatorship. His spies and some students as well as his business deals seek to purloin U.S. and European technology. His attacks on local languages and traditions in Tibet, Xinjiang, and Inner Mongolia amount to cultural genocide. Not only does he claim most of the South China Sea for China, but his mountain troops now push into Bhutan as well as India. His ships and missiles are designed to destroy U.S. aircraft carriers and local forces protecting Taiwan.

There are two or more sides to all these issues. Russian and Chinese representatives offer historical and other justifications for the actions of their bosses. Russians complain about NATO’s expansion eastward and U.S. shredding of the antiballistic missile treaty. Nearly everything China does is said to aim at recovering from Western and Japanese imperialism. Such arguments have some merit but bolster self-righteous posturing and bad behavior by Putin and Xi.

No global problem—climate, disease, pollution—can be solved without global cooperation. But being nice to others without reciprocity can bring martyrdom. Mutual distrust, on the other hand, condemns all sides to lose. Policies that benefit all sides can foster mutual gain. But this outcome is impossible so long as major players see life as a zero-sum enterprise.

Walter Clemens is Associate, Harvard University Davis Center for Russian and Eurasian Studies and Professor Emeritus of Political Science, Boston University. He wrote North Korea and the World: Human Rights, Arms Control, and Strategies for Negotiation (2016). His most recent book is The Republican Virus in the Body Politic: How to Reboot America (2020).