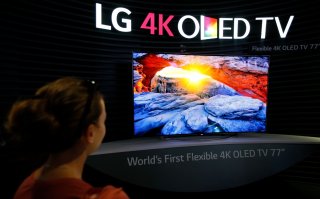 Last month at the Star Wars Celebration event in Anaheim, Lucasfilm, and LG announced that they would soon release a special-edition LG OLED TV. There had been hints of such a tie-in at CES back in January.

“LG Electronics USA in collaboration with Lucasfilm, unveiled today a special Star Wars edition of its award-winning LG OLED evo 65-inch C2 model,” the May press release said, as reported by Flat Panels HD. “The Star Wars LG OLED evo, limited to 501 TV units in the U.S., will feature a Star Wars-inspired UI, aesthetics, packaging, and gallery of Star Wars content. The TV will be available via LG.com with specific availability announced at a later date.”

Now, we know when that availability is. LG announced that orders will open for the LG Star Wars OLED TV on Tuesday, January 21. The TV is limited to just 501 models and will cost $2,999.

“Be the first to purchase the limited edition LG OLED evo Star Wars TV and feel the power of the dark side. Available exclusively to you on 6/21 at 10:45 am EST,” the email Monday said.

“The Star Wars LG OLED evo TV features a Star Wars-themed cosmetic design with a special edition Star Wars-branded version of LG’s Remote Control, an exclusive gallery of Star Wars content, and other exciting features delivered in Star Wars-branded packaging featuring Darth Vader,” the release on Monday said. “The remote-control user interface will mimic the iconic Star Wars Lightsaber, and sound of Darth Vader’s breathing when turning the TV on. Each TV box will include a numbered certificate of authenticity.”

The LG C2, which debuted at CES back in January, is currently ranked the second-best TV available on the market by RTINGS, behind only the Samsung S95B OLED model, which is the first QD-OLED released by that company. The C2 received a mixed-use score of 9.0.

“The LG C2 is an incredible TV for most uses. Its self-emissive technology is superb for watching movies or HDR content in a dark room,” the RTINGS review of the original version of the C2 model. “It's also brighter than most OLED panels, making it an excellent choice for watching TV shows or sports in a bright room, and the image remains accurate at a wide-angle, so it's great for a wide seating arrangement. It has an impressive selection of gaming features, and its low input lag results in a fantastic gaming experience.”

The most recent “Star Wars” show, “Obi-Wan Kenobi,” will wrap up its season on Disney+ this week.