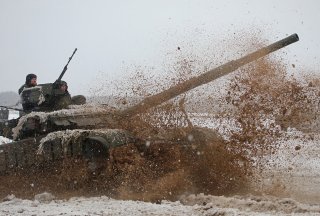 The State Department issued a Level 4 travel advisory for Ukraine on Thursday, requesting that all Americans within the country leave immediately.

The travel advisory urged U.S. citizens already present to leave, and strongly discouraged further travel to Ukraine, “due to the increased threats of Russian military action.”

“There are continued reports of a Russian military build-up on the border with Ukraine, indicating the potential for significant military action against Ukraine,” the advisory said, in reference to the ongoing border crisis between the two nations.

Russia has deployed more than 130,000 troops along its western frontier, leading to U.S. and European fears of an imminent invasion. Russian troops are also present in Belarus for military drills, which some commentators have speculated could be a ruse for invasion.

“The security conditions, particularly along Ukraine’s borders, in Russia-occupied Crimea, and in Russia-controlled eastern Ukraine, are unpredictable and can deteriorate with little notice,” the advisory said.

The advisory also included “Do Not Travel” notices for the Crimean peninsula and the Donetsk and Luhansk regions in Ukraine. Crimea was invaded and annexed by Russia in 2014. The eastern regions of Donetsk and Luhansk are controlled by pro-Russian separatist groups and are the scene of ongoing conflict.

The State Department indicated on Thursday that the U.S. government would be unable to help stranded Americans in the event of an invasion, and suggested that American citizens determined to remain should develop evacuation plans independently of government assistance. The embassy has reportedly planned to evacuate Americans to neighboring Poland, a member of NATO and a key U.S. ally in Eastern Europe.

The U.S. embassy in Kyiv has seen a drawdown in its personnel. Family members of U.S. diplomats there have been ordered to return to the United States.

President Joe Biden also pushed Americans to evacuate on Thursday, claiming that the security situation in Ukraine could deteriorate at any moment.

“American citizens should leave now,” Biden said in an interview with NBC News. “We’re dealing with one of the largest armies in the world. It’s a very different situation and things could go crazy quickly.”

The Pentagon estimated last week that Russia has now deployed “70 percent” of the forces that would be necessary to invade Ukraine along the border. Although the Ukrainian army has improved considerably in strength since Russia’s last incursion in 2014, Russia’s is far stronger, and most experts have agreed that Moscow would likely defeat Ukraine in a conventional conflict – although Kyiv would be able to offer significant resistance.

Although normally somewhat rare, Level 4 travel advisories – the highest-level warning offered by the State Department, urging Americans to cancel travel to the designated areas – have exploded during the COVID-19 pandemic, due to concerns of high coronavirus infection rates in many other nations.