The State of Hypersonic Weapons in the United States, Russia, and China 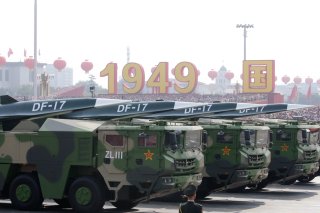 The United States government has researched hypersonic weapons—which travel in excess of Mach 5, or five times the speed of sound—since at least the early 2000s. However, those programs have accelerated in recent years due to the progress that China and Russia have made in the field of hypersonic weapons.

More recently, however, the United States has invested in hypersonic glide vehicles, which are brought into low earth orbit by rockets before falling back to earth at hypersonic speeds. Hypersonic cruise missiles, another platform of interest, rely on air-breathing engines to achieve blisteringly high speeds.

With U.S. adversaries developing their own hypersonic weapons, the United States’ own development programs are incredibly important. Gen. John Hyten, the former Commander of U.S. Strategic Command, explained that hypersonic weapons could allow for “responsive, long-range, strike options against distant, defended, and/or time-critical threats when other forces are unavailable, denied access, or not preferred.”

Critics, on the other hand, contend that hypersonic weapons don’t have a clearly defined mission and do not significantly contribute to deterrence.

Consequently, “U.S. hypersonic weapons will likely require greater accuracy and will be more technically challenging to develop than nuclear-armed Chinese and Russian systems,” a recent report from the Congressional Research Service (CRS) explains. The CRS report quotes an expert who explained that “a nuclear-armed glider would be effective if it were 10 or even 100 times less accurate [than a conventionally-armed glider],” thanks to its enormous nuclear blast effects.

The United States has several hypersonic weapons programs currently in progress, including two with the Air Force, one Army program, and another with the Navy. In addition, the Defense Advanced Research Projects Agency is experimenting with three programs.

China’s programs, on the other hand, are somewhat more opaque. In addition to the DF-17, a medium-range ballistic missile, Beijing has also tested the DF-41 intercontinental ballistic missile, which could be modified to launch nuclear or conventionally-armed hypersonic glide vehicles. The country has also reportedly worked on the Starry Sky-2 prototype hypersonic vehicle.