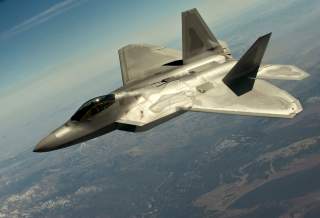 Key point: The F-22 has more of a likelihood of gaining the initiative early on and winning the battle before the two jets can come within visual range of one another.

The F-22 Raptor started life as a dedicated air superiority fighter in the same vein as the F-15C Eagle, the aircraft it was originally slated to replace. The aircraft was designed and built by Lockheed Martin, which had early experience building the first operational stealth warplane, the F-117A Nighthawk stealth “fighter”. In 1990, the prototype YF-22 fighter engaged in a flyoff with the Northrop YF-23 Black Widow II and won the competition, in large extent due to its emphasis on stealth and maneuverability.Stealth was a foundational feature of the F-22, and the plane’s stealthy profile was in part dictated by simulations done on the Cray supercomputer, an early supercomputer. The F-22 design maximized sensor evasion, with diamond-shaped wings and sharp, faceted surfaces. The speed brake, weapon bay doors and engine exhausts are serrated to minimize the aircraft’s radar signature while the large, vertical, canted tails reduce the fighter’s infrared signature from certain angles. The aircraft’s metallic surfaces are also coated with radar-absorbent materials and paint.

Kyle Mizokami is a defense and national security writer based in San Francisco who has appeared in the Diplomat, Foreign Policy, War is Boring and the Daily Beast. In 2009 he cofounded the defense and security blog Japan Security Watch. You can follow him on Twitter: @KyleMizokami. This article appeared in 2017.