Stealth F-35s to UAE: Could Congress Actually Block It? 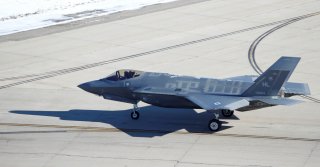 The top Senator Foreign Relations Committee leaders invoked Israel’s need to have a qualitative military edge (QEM), which could make the possible sale of the Lockheed Martin F-35 Lightning II Joint Strike Fighter to the United Arabs Emirates (UAE) anything but a “done deal.” In a show of bipartisanship, both Chairman Jim Risch (R-Idaho) and ranking member Bob Menendez (D-N.J.) highlighted their concerns to State Department officials over the deal.

“With all due respect, it doesn't take a rocket scientist to figure out that if Israel’s the only country in the Middle East that has F-35s, that selling it to someone else no longer produces that qualitative military edge in the air,” said Menendez, as reported by Defense News.

The proposed sale of the fifth-generation fighter jets to the UAE could present a long-term negative strategic impact for the State of Israel, warned the nation’s Air Force Chief Amikam Norkin. While the sale of the aircraft to the UAE isn’t part of the U.S.-brokered normalization agreement between Israel and the Gulf state, the sale of the jets was seen as having been essentially contingent upon Abu Dhabi’s acceptance of the deal, The Times of Israel reported.

“These things are not reflected in the strategic analysis as endangering Israel next week,” Norkin warned in an interview on Thursday. “These are things that could produce processes that may, in the long-term strategic balance, be less optimal for the State of Israel.”

A key fear is that strategic changes could occur in the region, and Norkin added that what today seems possible in a decade could seem less true. It is notable that while four Arab countries now recognize Israel, it was years in the making, and Israel has fought brutal wars with its neighbors multiple times since its independence in 1948. It is still not recognized by multiple other Arab powers—while Iran once had friendly relations that changed when the nation’s Islamic Revolution in 1979 toppled the former secular government.

A possible solution to satisfy both sides could see the UAE obtain a downgraded version of the F-35. This could include a way for Israeli air defenses to be able to detect the UAE F-35 with technology that effectively defeats the stealth capabilities of the fifth-generation advanced fighter aircraft. It is not clear however if this could entail changing the jet or by providing Israel with superior radar systems.

However, the decision as to whether the UAE gets the fighters may not be decided in Abu Dhabi or Jerusalem, but in the halls of Congress in Washington, D.C.

House Speaker Nancy Pelosi (D-Calif.) and Senator Majority Leader Mitch McConnell (R-Ky.) have both been vocal in their support for Israel’s QME, while the House Foreign Affairs Committee Chairman Eliot Engel (D-N.Y.) along with Vice Chairman Michael McCaul (R-Texas) have introduced legislation that would reiterate the United States commitment to preserving the QME of the State of Israel.

As Defense News reported, under the Arms Control Act, Engel, McCaul, Risch and Menendez control the congressional-review process for any foreign arms sale.

“Any potential arms sales must continue Congressional consultations on meeting our obligation to retain Israel’s Qualitative Military Edge and satisfying the other requirements of the Arms Export Control Act,” Risch said Thursday.

It is unlikely the matter will be resolved soon and possibly not until after the election. But even if the sale of the F-35 is approved, it would likely be six or seven years until any aircraft arrive in the UAE.

Meanwhile, Israel currently operates two squadrons of the F-35I Adir—a special version of the stealth aircraft that features Israeli-specific avionics. In addition, by the time the first planes arrive the United States could be well on the way to introducing a six-generation fighter aircraft—and such a plane could certainly provide Israel with the QEM to take on the F-35.