Stealth F-35s vs. Super Hornets vs. Grippens and More: What Fighter Will Finland Choose? 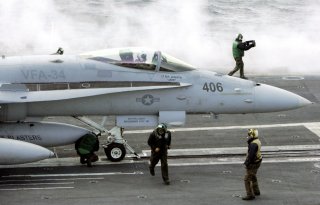 Finland is looking for a new fighter to replace the Nordic country’s aging F/A-18C/D Hornets. Helsinki’s current fleet of combat aircraft is not large—just fifty-five Hornets that entered service over a period of five years, from 1995 to 2000. But, they are approaching thirty-years old and are due for replacement. A quick look at the Finnish Ministry of Defense website reveals why they need to be decommissioned.

First and foremost, structural fatigue is something that cannot simply be repaired. It would not be cost effective to extend Finland’s F-18s service lives. Secondly, the United States—the Hornet manufacturer—is in the process of phasing out their fleet of F/A-18s. Most other countries that operate the older fighter are also doing the same and therefore makes acquiring spare parts more difficult.

Third, the Hornets are simply getting long in the tooth. Even if upgrades were done to Finland’s F/A-18s, their operational capabilities compared to other planes would still be diminished compared to more sophisticated airframes.

Though justified, the procurement process will be expensive, requiring a massive one-time boost in defense spending to acquire the new airframes. According to some estimates, Finland’s defense budget—importantly a non-NATO member—will balloon to $5.8 billion, a whopping 54 percent increase for the 2021 fiscal year. Overall, Finland estimates the entire program to cost $7-10 billion including maintenance and training.

As a ratio of GDP, the increase will raise Helsinki’s defense spending from 1.4% to over 2%, underscoring just how important new fighters are for Finland even during the global pandemic and shrinking national economies. The spending increase also points to Finland’s perennial worry and neighbor to the east: Russia. So, what airframes are being considered?

The ‘H’ in HX stands for Hornet, while the ‘X’ stands for Replacement. Five fighters are under consideration. Two of them are American, the newer F/A-18 Super Hornet as well as the Lockheed Martin F-35, and several European options, including the Swedish Saab Grippen, the French Dassault Rafale, and the Eurofighter Typhoon.

One of the variables that Helsinki has stressed is the fact that whatever airframe the HX program chooses must be a multi-role fighter capable of a variety of missions on land, air, and sea. And while acknowledging the importance of both ground-based air defense platforms and unmanned aerial vehicles, neither are being considered as a fighter replacement.

After receiving replies to their tender for a replacement under the HX program in 2018, the Finnish Ministry of Defense expects to end negotiations with manufacturers sometime this year and will make a decision on the Hornet replacement sometime in 2021. Stay tuned to see what Helsinki chooses.