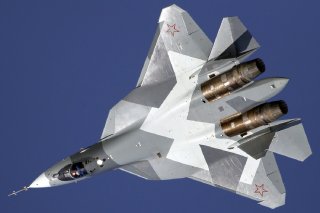 A video that the Russian defense ministry released on March 24, 2020 appears to depict, for the first time, an Su-57 stealth fighter firing an air-to-air missile from one of its wing-root weapons bay.

But some observers question the video’s authenticity.

The Kremlin released the video entitled “Beyond the Laws of Physics” apparently to commemorate Russia’s official Day of Fighter Aviation of the Russian Air Force on March 25.

The dramatic video features no fewer than four Su-57s flying in formation. At the 1:22 mark, a missile streaks from the vicinity of one of the fighter’s wing roots.

But the camera angle masks the weapons bay. It’s not totally clear that the missile actually fires from the bay, rather than from a temporary, fixed pylon. It’s also hard to say exactly what kind of missile appears in the video.

The distinctions matter. To remain stealthy, a fighter like the Su-57 needs to maintain a clean profile. For that reason, radar-evading jets such as the F-22 and F-35 routinely store their munitions in internal bays -- and open those bays only briefly to fire or drop a missile or bomb.

The reliable functioning of the Su-57’s weapons-bays is critical to the type’s effectiveness as a stealth fighter. The Su-57 has four weapons bays. The two wing-root bays plus two larger belly bays. The wing-root bays probably are too small to fit Russia’s standard R-74 dogfighting missile. The Kremlin reportedly is working on a smaller version of the missile specifically for the Su-57.

In any event, there are no public photos or videos of the Su-57’s wing-root bays in an open state. There likewise is no public information on how exactly the bays might work. The smaller wing-root bays, in particular, could require a complex mechanism to quickly eject a missile so that it clears the fighter’s airframe.

The F-22 features a trapeze that thrusts AIM-9 missiles from its wing-root bays. If Russia has mastered a similar trapeze system, it could go a long way toward making the Su-57 a functional front-line warplane. But we need a clearer view of a missile-firing in order to say for sure whether that’s the case.

Samuel Bendett, an adjunct senior fellow at the Washington, D.C. Center for a New American Security, told The National Interest there’s no reason to doubt the video’s authenticity or the Kremlin’s sincerity. “Why build an aircraft and then hide how it shoots missiles, or even what kind of missiles are on it?”

Bendett pointed to the Okhotnik, the Russian air force’s first armed, jet-powered drone. “Remember all the hyperventilation about Ohotnik … prototype not being fully ‘stealthy’ because of how its engines looked?” Bendett said.

“That was a prototype and a testbed, so the whole idea is to test the new platform with existing or modified equipment to then move on to additional [modifications] and additional factory tests with the equipment and munitions actually designed for that airframe.”

But Moscow has a history of inflating the Su-57’s capabilities. The Su-57 twice has deployed to Syria, but there’s no evidence that the fighters actually flew combat missions while in the war zone.

The Russian air force operates around a dozen pre-production Su-57s. Another 76 are on order. Skeptics have questioned just how complete the Su-57’s design is and how likely Russia is to actually build the additional 76 planes Moscow wants.