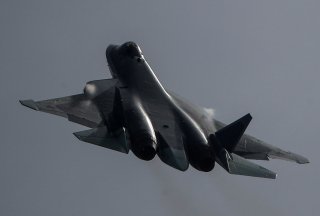 It hasn’t been an entirely smooth ride for Russia’s fifth-generation Su-57 fighter jet. One of the first serially-produced Su-57s crashed during a training session in Russia’s Far East in late December last year, while even a few years ago it was clear the aircraft might cost more than Russia can afford.

Given the latter factor, Moscow is taking a similar course of action as with its next-generation T-14 Armata main battle tank (MBT)—it is looking for foreign customers to help subsidize the production. Last month, Russia announced that production of the new partially automated tank was being ramped up while the tank was displayed to potential foreign buyers during the Army-2020 international arms fair, which was held outside of Moscow.

On Tuesday, Russian state media reported that Moscow will offer the Su-57 jet for export and it was expected that foreign demand was likely to increase after the Russian Armed Force’s order is fulfilled.

“It is unlikely that there will be a significant demand until we ship enough machines in our own army. […] So, our number one goal is to ship the pale to the Russian Armed Forces. Meanwhile, we offer this machine to the foreigners, we conduct our advertisement campaign,” Rosect aviation complex’s industrial director Anatoly Serdyukov told Tass, without specifying what countries exactly may become potential buyers.

This isn’t a complete change of direction for Moscow, which has regularly sold military hardware to partners around the world. In the case of the Sukhoi Su-57, which first flew in 2010 and was reportedly used in Syria in 2018 and 2019, the Russian Air Force will receive the first batch of aircraft—but in May of 2019 Russian president Vladimir Putin said that seventy-six of the aircraft would only be procured by 2028.

Tass also reported that Russian Federal Service on Military-Technical Cooperation spokeswoman Maria Vorobyova disclosed earlier that several countries sent their official application for purchase of the Su-57, adding that the matter of the machine’s promotion is in the works.

The advanced Su-57 was developed to destroy all types of air, ground and water-based targets. The plane, which is the first Russian aircraft to utilize stealth technology, was also designed to have supercruise, supermaneuverability and advanced avionics to overcome attacks from the prior generation fighter aircraft as well as ground and naval defenses. The aircraft also has supersonic cruise speed, internal weapons bays, radio-absorbing coating and the newest onboard equipment.

It was intended to succeed the MiG-29 and Su-27 in the Russian Air Force.

Potential foreign operators include Algeria and India, but also notably Turkey, which could adopt the plane given that it was expelled by the United States from the Lockheed Martin F-35 Lightning II Joint Strike Fighter program for its purchase of the Russian-built S-400 anti-aircraft defense system. Last year, Turkish president Recep Tayyip Erdoğan confirmed that Turkey and Russia were negotiating a deal involving the aircraft—a move that could draw Turkey closer to Russia but how it fits in with Turkey’s NATO commitments are yet to be seen.