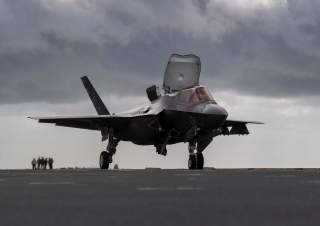 Key point: If London isn't willing to spend for more F-35s then it needs to be firm about which branch is going to get them.

When there aren’t enough F-35s to go around, who should get them: The air force or the navy?

That question is reportedly roiling the British military as the Royal Air Force and Royal Navy dogfight over which F-35 stealth fighters the cash-strapped UK should buy.

The Royal Navy is furious at alleged RAF plans to grab many of the 138 F-35s that Britain is purchasing, according to Britain’s Sky News.

Sources close to the Royal Navy “accused senior Royal Air Force officers of privately pushing for a version of a supersonic warplane that can only fly from the land to be included in an initial purchase of 48 F-35 Lightning II jets, instead of them all being able to operate from ships at sea,” Sky News reported.

The first batch of forty-eight F-35s, which began arriving this year and will run through 2025, are scheduled to be the F-35B, the short takeoff/vertical landing (STOVL) variant. STOVL aircraft can operate off the short decks of “ski-jump” carriers like Britain’s new Queen Elizabeth-class vessels, and then land vertically. This makes these ships smaller and cheaper than American-style carriers with their long flight decks, catapults and arresting gear for conventional aircraft launch and recovery.

"This will completely undermine…the whole carrier program," one source told Sky News. “There is no operational reason whatsoever for the RAF to have the ‘A’ [land-based] variant. If it can't fly from an aircraft carrier, it shouldn't be purchased."

Interestingly, the Royal Navy argues that buying more land-based and fewer carrier-based F-35s will anger the Americans. “The United States regard the Royal Navy as the one and only peer navy able to operate aircraft carriers,” one naval source said.

With inimitable British wit, he added, “Aircraft carriers need to be able to operate with combat aircraft. The clue is in the name.”

The RAF and the Ministry of Defense deny a plot to snatch the Royal Navy’s F-35s. But whether or not the reports are true, or just the usual interservice rivalry and suspicion, they illuminate the problem that Britain faces. Most of the thirteen nations that are part of the F-35 program, such as Israel, South Korea and most recently Belgium, are land powers. They only need to buy land-based F-35s for their air forces.

Even if the Royal Navy is only a shadow of its former imperial glory, Britain still aspires to remain a naval power. Britain—as well as Japan—are building a small force of carriers or carrier-like vessels, which require the naval F-35B (which can also operate from land) as well as F-35As. For the United States, that’s not such a dilemma: even with the F-35 costing almost $100 million apiece, the United States can afford to equip the U.S. Air Force with the F-35A, the U.S. Navy with the naval F-35C, and even the U.S. Marine Corps with the F-35B.

Thus the United States can operate three different F-35 fleets that are similar but not identical in capabilities and logistics. But that’s not so easy for Britain, which already is US$7 billion short of the cash it needs to buy all the items on its 10-year military procurement plan, which calls for new submarines and armored vehicles, as well as aircraft carriers and F-35 jets.

Michael Peck is a contributing writer for the National Interest. He can be found on Twitter and Facebook. This first appeared in December 2018.