Stealth Shortage: Does the Pentagon Have Enough F-35s to Test? 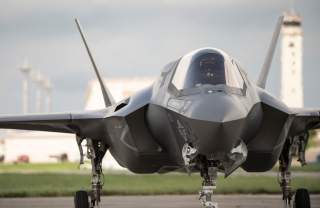 In June 2019, only 8.7 percent of the test fleet was rated “fully mission-capable,” according to a Department of Defense document obtained by the Project for Government Oversight, a non-governmental watchdog organization.

“The 23 aircraft in the test fleet achieved an abysmal “fully mission capable” rate of 8.7 percent in June 2019 according to the chart, which covers December 2018 through mid-July 2019,” POGO said. “A fully mission capable aircraft can perform all of its assigned missions, a particularly important readiness measure for multi-mission programs such as the F-35. The June rate was actually an improvement over the previous month, when the fleet managed a rate of just 4.7 percent. Since the beginning of operational testing in December 2018, the fleet has had an average fully mission capable rate of just 11 percent.”

A 2017 Pentagon document indicated that a minimum of 80 percent is “needed to efficiently execute IOT&E [Initial Operational Test & Evaluation], especially for launching variant-specific four-ship flights for many of the mission trials.”

To be fair, with just twenty-three aircraft in the test pool, it would only take a few aircraft operational or not to swing the percentages. Still, if fewer than 10 percent of a twenty-three-plane pool is fully functional, then this means that full testing is limited to only a couple of aircraft.

“Aircraft mission capability statuses can be degraded for reasons including a lack of spare parts or a failure in a mission system like the radar or electronic warfare instruments,” notes POGO. “According to sources within the F-35 program, a frequently failing component is the Distributed Aperture System. This system provides the pilot warnings of incoming missiles and generates the imagery for the $400,000 helmet that the pilot wears. The F-35 can still fly with problems like this, and, using the data links between aircraft, some of the information from a functioning system on another F-35 can fill in a blind spot in a degraded one. But this only works up to a point, and to fully test the program’s capabilities, all systems must function properly.”

Adequate testing would be necessary for any aircraft that costs almost a hundred million apiece. But when it’s an aircraft that’s part of a trillion-dollar program, involving thousands of aircraft and a dozen nations, then testing is a really big deal. In fact, testing will decide when the F-35 moves from limited to full-rate production.

“The operational test fleet’s low readiness rates are surprising, considering the high-profile nature of the fleet’s mission,” POGO points out. “Under federal law, a major defense acquisition program cannot legally proceed to full-rate production until the director of operational test and evaluation (DOT&E) submits a final report to the secretary of defense and Congress following the conclusion of the testing process. Because of this, the operational testing fleet receives extra support in the form of larger maintenance crews, and is presumably higher on the priority list to receive spare parts.”