'Stealth' Soldiers: The U.S. Army and Marine Corps Could Soon Have the Ultimate Edge 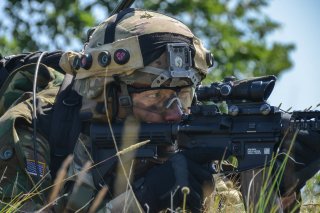 The Marine squad, aided by both the element of surprise and the jarring din of their rifles and machine guns, catches the enemy off guard. After quickly regrouping however, the enemy begins to return effective fire.

Unbeknownst to the encamped enemy, the squad at their flank is lying in wait. The second, hidden squad aims at the enemy. Machine-guns and rifles also open fire—but the second squad’s weapons are equipped with sound suppressors.

The enemy is completely focused on the squad at their front and has no idea that they are taking fire from two directions. Once they realize their mistake, it’s too late—the enemy squad is annihilated. The two Marine squads are successful, thanks to their sound suppressors. They are stealthy infantry.

Suppressor technology is nearly as old as the machine gun, and has existed since the early 1900s. Hiram Maxim, the inventor of the Maxim machine gun, is generally credited with inventing the first early silencer, which shared some characteristics with car mufflers, also developed around the same time.

Rifles equipped with silencers often have to be cleaned with greater frequency due to increased propellant buildup. In some cases, dirty propellant gas, lubrication, and lead particles from bullets can be sprayed backwards towards the shooter’s face or body. They can also in some cases magnify the flash caused by shooting. This can make a shooter quieter but more visible especially at night, trading noise for flash.

Both the United States Marine Corps and the Army are in various stages of testing and evaluating several sound and flash suppressor designs that they hope will give their respective branches an edge in future fights. The Marine Corps in particular is pursuing the project with gusto and has outfitted several Marine companies with suppressors to better understand how decreased noise on the battlefield affects maneuvers.

One of the products the Corps is evaluating is a new baffleless suppressor manufactured by OSS. Their suppressor directs propellent gas from the bore through the suppressor and out the front, reducing gas blowback, sound, and recoil. In addition to better accuracy and the ability to remain concealed for longer, the Marines found that suppressors allow infantry squads to more effectively communicate with each other on the battlefield.

An Army initiative seeks to reduce the sound signature of the M240 machine gun, a belt-fed medium machine gun. The Army project combines the noise-reduction features of a silencer with the recoil compensation benefits of a muzzle brake by using a modified baffle system with outlets for propellant gas to travel out the front of the suppressor. The so-called “smuzzle” is said to reduce the noise signature of the weapon by 50% and reduces flash by 25% at just a slight cost in weight.

Though still in development, the advantages of sound suppressors during daytime operations are self-evident. If flash can also be successfully managed, expected to start seeing sound and flash suppressors more widely distributed to grunts.