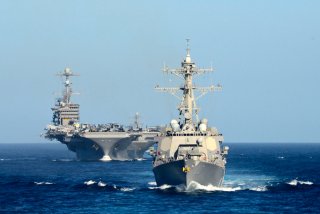 During a recent media conference call, the chief of Naval Operations, Adm. Mike Gilday, explained the Navy’s Navigation Plan 2022 and what the implications are with respect to China, Russia, and Ukraine.

One of the more significant points brought up during the conference call was what effect the ongoing Russian invasion of Ukraine has had on the U.S. Navy and if that conflict has shifted Admiral Gilday’s calculus, if at all. He said the following.

"So with respect to what’s happened between Russia and Ukraine and this plan, I will say specifically with respect to kind of four very important lines of effort that we’re keyed in on in terms of how we maneuver, how we shoot, how we defend, and how we resupply,” Admiral Gilday noted.

He added that “in terms of how we defend, definitely the sinking of the Moskva has my attention in terms of terminal defense, defense of the fleet. And so our investment in next-generation technology with respect to…whether it’s directed energy—in other words, laser weapons—or high-power microwave, what’s happened in the Black Sea has informed my thinking on that particular line of effort and the resources we’re putting against it.”

One of the more interesting answers Admiral Gilday gave was in response to a question about the Chinese Navy and the fixation that many have on the Chinese Navy’s number of ships, the total number of hulls that make up their fleet.

Admiral Gilday pushed back against this ship-for-ship comparison between the Chinese and American navies.

“In order to look at this holistically, you’ve got to take a look at what we’re bringing to bear. In fact, I can talk about what we’re delivering mid-decade in the 2020s from under—from under, on and above the sea, right? I think you need to consider all of those vectors together,” Admiral Gilday explained.

“Standing up an Information Warfare Task Group in the Pacific under Admiral Paparo right now. There’s a lot of work going on in that dimension in the classified realm that I can’t talk about.”

However, the Chief of Naval Operations also mentioned the assets that the U.S. Navy has underwater, assets that are unparalleled in capabilities.

Admiral Gilday was clear that while China is the pacing threat and may outnumber the United States in terms of the total number of surface ship hulls, the U.S. Navy remains unparalleled in terms of near-future capabilities as well as underwater capabilities.