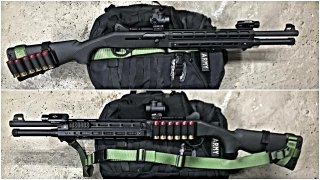 In the world of firearms, Accokeek, Maryland-based Stoeger isn’t as well known as the American brands such as Mossberg and Winchester, or English makers such as William Evans and Holland & Holland, yet it has made a name for itself for producing reliable shotguns. In addition, Stoeger, which is now a wholly-owned subsidiary of Benelli (itself part of Beretta), continues to import firearms from the Belgian-based Fabrique Nationale as well as Uberti.

The company once even had the largest gun shop located in New York City, and today it continues to make fine reasonably priced, rugged and dependable shotguns.

If fine craftsmanship that is worthy of displaying on a wall is what one wants, then there is always Holland & Holland or Benelli, but for a reliable “workhouse” look no further than Stoeger.

While the company may now have Italian owners it remains a company that is true red, white and blue and its newly introduced P3000 Freedom Series Supreme pump-action shotguns set the standard for dependability and versatility at an affordable price. It is the shotgun that could make for an excellent home defense weapon but can still stand up to the rigors of a day in the field.

The Freedom Series is an improved version of the popular Stoeger P3000 system, which features American-made components and American engineering. The key to this new pump-action shotgun is its increased versatility, which is made possible thanks to its pistol grip and six-position telescoping rear stock and adjustable cheek rest. It features a rubberized pistol grip and checkered pump fore-end to provide a solid grip no matter the loads that are being fired.

The stock even folds to the gun’s left for compact storage and transportation but the stock can be quickly deployed should the need arise, while the integrated sling allows for convenient carry options. It measures 40.5 inches with the stock deployed and a compact twenty-seven inches when folded.

It is chambered for both 2 3/4-inch and 3-inch shells, and the shotgun also offers an extended capacity, seven-round tube-fed magazine, while a round can be chambered to provide shooters with eight rounds of buckshot or slugs. There is a cross-bolt safety to prevent accidental discharge. Additionally, the sights include a ghost-ring style rear sight and blade front to provide fast target acquisition and improved accuracy. Also, there is a short rail atop the receiver for mounting a red dot, flashlight or laser.

Weighing in at 7.3 pounds, it is far from the lightest pump-action shotgun on the market but the P3000 Freedom Series Supreme is more than durable enough to tackle almost anything. With an MSRP of $469 it is an affordable home defense and hunting option—and this is the shotgun that can make the transition to both worlds seamlessly.