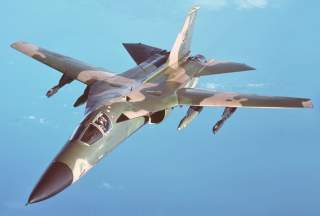 Everything worked as advertised, and it was a smooth ejection. When the parachutes opened, we were in the overcast, so we didn’t see the airplane hit, but we did see the glow of the explosion, and when we broke out we could see the wreckage burning fiercely. We came down on the side of a hill, and the capsule rolled over onto my side. But it was a real nice landing . . . like someone had raised your chair a couple of feet into the air and dropped it . . . and we both exited from Bob’s side completely unhurt. It was probably about 2230 when we hit the ground.

“Fortunately, we had attended a jungle survival school a couple of weeks previously, and the lessons learned were still fresh in our minds. We had been told to separate as soon as possible, since it was much easier for one person to hide than two. We would try to stay within a few hundreds yards of each other to make the rescue as quick as possible when the Jolly Greens got to us . . . and we never doubted that they would come. We both had survival radios, and they were working just fine. It was the last I was to see of Bob for more than a month.

“It was the beginning of the wet season in North Vietnam, and though the area we were in was not thick jungle, the tall grass was quite wet, which made for a high degree of discomfort in the cool temperature. I found what I thought was a good hiding place, and settled down to wait for daylight, and our rescuers.

“The North Vietnamese were out in force by 0430 the next morning searching for us. I had picked a hiding place right next to what was apparently one of the main trails up the side of the hill, and I spent most of the day literally frozen in place. I was so motionless that I wound up with a pinched nerve in my arm, which was under me all lay. Shortly after dark, the last search party of the day came up the trail and paused next to my hiding place. They had a portable radio and were listening to Radio Hanoi, which I had assumed was knocked off the air by the bombing. After what seemed like an eternity, they moved off down the mountain.

“I spent the next two nights moving to new hiding places. The weather in our area was so bad that we didn’t even see an airplane that we could call on our survival radios. On the third day, a flight of Sandy A-7s came into our area. Since Bob was closer to the top of the mountain, he did all the talking, relaying whatever I had to say. The clouds were still too low for them to come down through, but we were able to talk to them, and they pinpointed our position. Unfortunately, at the end of our transmission, I heard rifle fire from Bob’s position.

“Bob had been hiding in some vines, and the North Vietnamese had apparently heard him talking. One of them came crashing down the hill and just by chance stepped on him. The startled Vietnamese backed up, and fired. Luckily, he missed, but that brought the rest of them down on Bob. The volleys of fire I had heard were signals that they had caught an American. They trucked him off to Hanoi, and I was left alone . . . almost. The patrols in my area continued.

“On the fourth day, the A-7s returned, pinpointed my position, and then said that they were low on fuel and would go out to a tanker, gas up, and return. Well, by the time they got back, the weather had socked me in and they couldn’t get back down.

“The next day the weather cleared, and the bombing of Hanoi resumed in earnest. I spotted a big V of A-7s outbound from their target and called them, but they wouldn’t answer. Apparently they reported the call to the Sandies though, because it wasn’t long before they were over me. After determining my position, they left to get a helicopter.

“As luck would have it, there was just one .50 caliber gun position in the area, and helicopter flew right over it on his approach to my position, and they really hammered him. His refueling boom was all but shot off, the co-pilot was seriously wounded, and they were leaking fuel. To his credit, the pilot still tried for the pick-up. I had not given them real explicit instructions on my position though, and they came to a hover about twenty feet from me, on the steep side of the hill. I decided that it was now or never, and made a run for the penetrator, which was on the end of the cable. Just as I was about to make a grab for it, I lost my footing and the downwash from the big HH-53 knocked me to the ground. I did a backflip, and rolled down the hill. When I got up, the helicopter was leaving. I can’t really blame them . . . they were pretty well shot up, and may have thought that I had been hit by ground fire. As it was, they just barely made it out to a Lima Site in Laos, where the back-up Jolly Green picked them up. I later learned from the Combat Cameraman on that helicopter that the North Vietnamese were running towards them, firing their AK-47s, while they hovered over me.

“Why the North Vietnamese didn’t really comb the area I’ll never know . . . they must have known the helicopter was trying to get someone. But they didn’t, and I moved again that night.

“By this time, the two pints of water that had been in my survival gear was long since gone, and I was getting mighty thirsty. The light misty rain that fell most of the time only served to keep me wet, cold and miserable. The jungle instructors had told us about the water vines and bamboo that existed in North Vietnam, but they had neglected to tell us that they were dry until well into the wet season. I drilled into several of these looking for water, but only found cool air. While I was hiding the next day, several Vietnamese came up the trail close to where I was. I would swear that one of them spotted one of those drilled bamboo, and exclaimed: “LOOK! AMERICAN!” Anyway, whatever he said precipitated a search of the area. I heard one of them coming my way, and tucked everything in. I had lost my mosquito net in the jump for the helicopter, and that had provided most of the camouflage for my face. I put my gloved hand over my face, and held my breath. I heard and felt the grass being parted over my head, but again my luck held and he didn’t see me.

“Shortly after that, a flight of F-4s came into the area and called me on the radio. The flight lead spotted my position and told me to move to a better area for pick-up. Rather than give instructions that the North Vietnamese might overhear and understand, he told me to move from Nellis to my home. Nellis AFB is where we had been based, and we had lived in Las Vegas, which is almost due south from Nellis. But I have always considered Iowa my home, and that, of course, is almost due east of Nellis.

“The next day there was 10,000 foot overcast, and the A-7s punched down through it and found me again. The leader called me and said: “Hey, did you know you were right up against a house?” Well I didn’t of course, and I moved away from it while they strafed the house and environs. They picked up a lot of return fire, and told me that I was going to have to move to an area that was not quite so hot. In the meantime, they dropped a survival package that contained water, food, and batteries for my survival radio, which was getting weaker every time I used it. They gave me directions to the package and headed home.

“I knew it was a hot area, because I had heard AK-47s firing at them from pretty close to my position. I had to decide whether it was best to just get the hell out of that area as quick as possible, forgetting the water in that package, or to go for that water. By this time, I was really thirsty, and the vote was 51 to 49 in favor of the water. I cautiously made for the area in which they had said the package had fallen. Suddenly, I came to a pretty well beaten path. I looked both ways and stepped gingerly across. The trip wire they had strung at the edge of the trail was practically invisible, and the explosive cap that announced it’s disturbance was the first indication that I had snagged it. I dove into a thicket of brush, but they had heard the cap go off, and the area was swarming with them in no time at all. It didn’t take them long to spot me. Then they just stood around jabbering and pointing at me. Finally, they got some guy to come up and tap me on the shoulder. I knew it was all over.