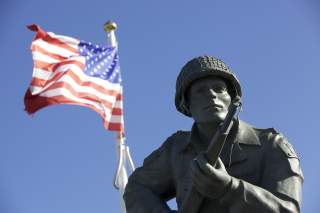 They attacked behind enemy lines hours before D-Day, parachuted into high-risk enemy territory and fought heavy concentrations of Nazi troops to secure bridges and roadways for Allied invading forces.

The 101st and 82nd Airborne Divisions, now famous in part for these D-Day missions, took on an assignment knowing there would be heavy casualties – all for the Allied WWII Normandy invasion.

As paratroopers, some air-dropped from C-47 aircraft and others landed with “glider” aircraft, all under heavy enemy fire. Glider aircraft were soft-skinned aircraft without an engine.

“Many aircraft were pulling Gliders, when they got close to their objective, the pilots cut the rope and troops landed in a flat clear field,” Coble said.

Airborne forces started dropping just hours before the larger D-Day invasion which launched on June 6, 1944. The landings took place at around 7AM. However, German forces were ready to attack landing forces and heavy Nazi Flak gun fire destroyed some of the arriving aircraft.

“Many guys were killed because the planes were shot down before they got to their objective – anti-aircraft fire was so heavy,” she added.

Despite the mission’s ultimate success, things did not go as planned at all. Airborne forces, which flew East over the Contentin Peninsula toward Utah and Omaha Beach, did not land at the intended objective. Many troops wound up landing in marshy areas between Utah and Omaha Beach, 20 miles away from the objective in some cases.

“They accomplished their objectives in a manner different than they expected,” Coble said.

Coble explained that the arriving aircraft got jumbled up, and members of the 101st wound up landing on top of each other. Instead of jumping from C-47s ahead of the objective, as intended, many paratroopers wound up landing much differently than anticipated.

“Pilots were scared flying through all the anti-aircraft fire. They did not slow down to let the paratroopers out. Many guys had equipment ripped off before they jumped. Some guys did not have anything when they landed. They were scavenging for themselves seeking food and ammo,” Coble said.

U.S. forces at times had trouble advancing upon landing. The Germans had flooded fields and waterways and used natural dirt and tree fences along with hundreds of acres of mine fields.

“Much of the land was covered with water. There were paratroopers that drowned because they were carrying so much weight. Their equipment pulled them down,” Coble added.

The success of the D-Day invasion, according to historians, is also due to a massive strategic deception by the Allies. U.S. forces set up rubber tanks and decoys at the narrowest strip of the English Channel, right near the the U.K. port of Dover. The distance from Dover to Calais on the Northern French countryside was the shortest of the entire Channel. However, as history notes, the actual invasion took place much farther West, leaving the Germans less prepared.

“The Germans did not fully expect the attack to be at Normandy,” Coble explained.