This Strange Gun Fired Millions of Bullets for Russia, China and North Korea 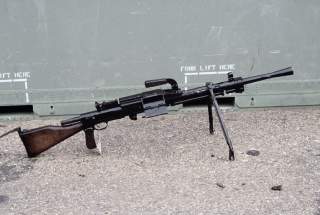 Since 1928, the battlefields of the world have seen an oddball Soviet-era weapon that proves the truth of the old saying, “Looks aren’t everything.” Its nickname was once “Stalin’s phonograph” — and the staccato tune it plays is the sound of automatic fire.

Used by the Russians to gun down both the Finns and the Nazis, hefted by Chinese communist and North Korean troops fighting United Nations forces, and carried by the Viet Cong and the North Vietnamese when attacking American soldiers, the Ruchnoy Pulemyot Degtyaryova Pekhotny — better known as the DP light machine gun — has spilled a lot of blood.

Even today, U.S. forces or foreign military observers occasionally encounter the DP in the hands of belligerents such as Somali militias and Taliban fighters. In fact, for a weapon considered obsolete since the 1960s, armed forces around the world still found reasons to keep the DP at hand.

Designed by one of the Soviet Union’s best — and often overlooked — firearms innovators, the DP has only a few working parts and famously tolerates battlefield grit and dirt. It is a light machine gun designed for a peasant’s use.

Even though the newly-created Bolshevik government of the Soviet Union made a separate peace with the Central Powers and ended its involvement in World War I early, the young Red Army still cast an interested eye on the fighting. Many Soviet generals were impressed with light machine guns used during World War I such as the Lewis Gun, a weapon originally purchased by the Tsarist regime for Russian use.

The Lewis was an interesting weapon for the time — it fired rifle cartridges, had a pistol grip, a bipod and distinctive pan-shaped magazine. A pan magazine differs from other drum magazines because the cartridges are stored perpendicular to the axis of the magazine’s rotation as it feeds ammunition into the weapon. The pan magazine mounts on top of the firearm where it lays flat, making the machine gun look like it has a old-fashioned phonograph turntable attached.

However, the Red Army wanted a lighter weapon than the Lewis. The Soviet government wanted a domestically produced machine gun that could be manufactured by an unskilled workforce.

The Red Army handed the task to Vasily Alekseyevich Degtyaryov, one of the most prolific weapons designers and engineers in Soviet history.  Today, the most commonly remembered Soviet weapons designer is Mikhail Kalashnikov, whose eponymous assault rifle is used around the world.

However, Degtyaryov deserves more contemporary recognition that he often receives. Born in 1880 in Tula, a city south of Moscow associated with weapons and ammunition manufacturing to this day, he was a military engineer for the Tsars and the Soviets.

Degtyaryov headed the first Soviet small-arms bureau, where he was responsible for the design of multiple machine guns, submachine guns and anti-tank rifles. He eventually earned the rank of major general of the Red Army engineers and artillery service, and received a doctorate of technical sciences.

On top of that, Degtyaryov was only the second recipient of the Hero of Socialist Labor award. The first recipient was none other than Joseph Stalin, who received the award just two weeks beforehand. Lauded throughout his long lifetime, Degtyaryov received numerous other Soviet medals and awards for his achievements before his death in 1949 — despite the fact that he did not join the Communist Party until 1941.

Using the Lewis Gun as a point of departure,  Degtyaryov worked with the most common rifle round in the Soviet Union — the 7.62 x 54R-millimetercartridge used in the Mosin-Nagant rifle once carried by Russian and Red Army troops. It is a powerful round — and the longest serving. First developed in 1891, it is still carried to this day as a military-issued round, and also is one of the few standard-issue rimmed cartridges still in military use.

The DP not only uses 7.62 x 54R millimeter cartridges, but it is a gas-operated light machine gun that is far simpler than a Lewis Gun. It has six working parts and tolerates dirt and carbon buildup very well — in fact, Soviet soldiers joked that the weapon fired best after it had been buried in sand.

What’s more, it has a 47-round pan magazine similar to a Lewis gun. When a gunner fires the DP, the magazine cover rotates like a phonograph — that prompted the Soviets to nickname the weapon proigryvatel  (“phonograph” or “record player”).

The DP is not without problems. In its original version, the bipod was flimsy and frequently collapsed or broke. The pan magazine is tedious to load, heavy when loaded, and it takes time to attach it correctly to the weapon — and time is not always in ample supply on the battlefield.

But the DP has a rate-of-fire of up to 600 rounds per minute, which means the barrel is less prone to overheat and the weapon is steadier to aim. Weighing less than 25 pounds loaded and with an effective range of about 875 yards, it can lay down suppressive fire or be carried during assaults when fitted with a shoulder strap.

Like so many other Soviet-era weapons, it could be churned out in mass quantities. So many were manufactured — including a modernized version called the DPM that attempted to eliminate the DP weaknesses — that the Soviets gave the machine gun to satellite countries and other nations throughout the communist world.

Even though the Soviets replaced the DP and its variants during the 1960s with the PK machine gun, the North Koreans and People’s Republic of China made their own copies of the DP. Interestingly, the PK continues to use 7.62 x 54R-millimeter cartridges because it produces more bolt thrust that helps cycle the weapon than the 7.62 x 39-millimeter Kalashnikov round.

So, it might look odd to the untrained eye, but the DP is an extremely simple, effective weapon whose sound is still heard on the battlefield — even though it was designed more than 80 years ago, fires a cartridge invented more than a century ago, and looks like it has something on it that played your grandmother’s Perry Como albums.