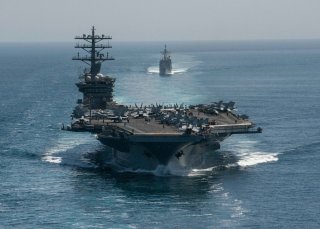 President Biden said again on Monday that the United States would intervene militarily if the self-governing island of Taiwan were to come under attack by China.

"Very quickly, you didn't want to get involved in the Ukraine conflict militarily for obvious reasons. Are you willing to get involved militarily to defend Taiwan if it comes to that?" a reporter asked Biden during a press conference alongside Japanese prime minister Fumio Kishida.

“You are?” the reporter shot back.

"That's the commitment we made," the president said.

The United States has provided large volumes of military aid to Taiwan to help deter and possibly defeat a Chinese invasion, but Washington has long remained intentionally ambiguous on whether or not American forces would directly intervene in the event of a Chinese attack on Taiwan.

CNN reported, citing White House aides, that top administration officials were caught off-guard by Biden’s comments. The White House seemingly tried to walk back the president’s statement, with a spokesperson insisting that there are no changes to Washington's Taiwan policy. "As the president said, our policy has not changed. He reiterated our One China Policy and our commitment to peace and stability across the Taiwan Strait. He also reiterated our commitment under the Taiwan Relations Act to provide Taiwan with the military means to defend itself,” a Biden administration spokesperson told Fox News.

President Biden previously said in October 2021 that the United States would protect Taiwan from a Chinese invasion—those comments were similarly walked back by the White House.

Beijing expressed "strong dissatisfaction and firm opposition" to Biden’s comments. "On issues concerning China's sovereignty and territorial integrity and other core interests, there is no room for compromise," said Chinese Foreign Ministry spokesman Wang Wenbin, according to CNN. "We urged the US side to earnestly follow the One China principle ... be cautious in words and deeds on the Taiwan issue, and not send any wrong signal to pro-Taiwan independence and separatist forces—so it won't cause serious damage to the situation across the Taiwan Strait and China-US relations," Wenbin added.

Biden’s Taiwan comments came in the run-up to the second in-person Quadrilateral Security Dialogue, also known as the “Quad,” a platform for strategic dialogue between Australia, the United States, India, and Japan that some have interpreted as a measure aimed at containing China.