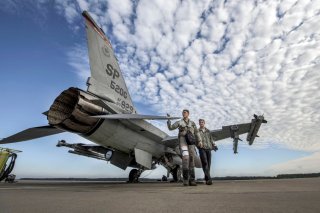 Imagine a world where a British student pilot can strap into a German-owned jet aircraft and be instructed by a Greek instructor pilot on an American base in the United States. While that may sound far-fetched or utopian, it is the reality of the ENJJPT program at Sheppard Air Force Base, Texas.

As a former Instructor Pilot and Operations Support Squadron Commander in the Euro-NATO Joint Jet Pilot Training Program (ENJJPT) program, I can attest that investing in foreign training programs as part of a robust national defense strategy is well worth the resource commitment. Training together in a multi-national environment enhances allied and local relationships, fosters multinational operations, builds interoperability, breaks down cultural barriers, and results in the future ability to capitalize on the comparative advantages of our allies and partners.

During his first visit to the Pentagon, President Biden charged the US military to “defend vital interests, deter aggression, fight and win.” His administration plans to lean heavily on allies and partners in current and future challenges, emphasizing foreign training programs as part of the broader policy solution for strengthening existing relationships and building new ones. The US will need allies and partners to contend with great-power competitors China and Russia, non-traditional threats such as pandemics, and gray zone warfare. Considering this, the U.S. should seize the training advantage that our predecessors thoughtfully pursued to ensure the military is ready to respond. We should expand these training opportunities with robust goals for the U.S., our allies, and partners to best accomplish his direction. The administration should include foreign training, in all its shapes and sizes, as a key sub-pillar of the next National Defense Strategy (NDS).

Relationships: Proactively building and sustaining relationships is vital. When crises hit, established relationships make all the difference, as we have seen since 9/11. Admiral McRaven, former US Special Operations Commander, was often quoted as saying, “You can’t surge trust” when referring to the human domain of understanding culture and physical domains. Trust is critical in an NDS that relies heavily on allies and partners.

Capability, Capacity, and Technological Interoperability: Training partnerships can drastically enhance a nation’s capacity and capability. Some nations train in other countries to leverage and pool each other’s resources to maximize both elements. In many cases it makes economic sense to train together. Also, if one nation has vast experience in a core area like Estonia does in cybersecurity, then it makes sense to leverage Estonian cyber expertise, as is done at the NATO Cooperative Cyber Defence Centre of Excellence in Tallinn, Estonia. In fact, this organization is currently led by Col Jaak Tarien, a United States Air Force Academy graduate, a prime example of the Four-Year International Cadet Program.

Long-term training programs and short-term training exercises allow allies and partners access to military facilities, foster shared ideas and information, and improve members’ education and operational doctrine. No military campaign is perfect, but an example of a short-notice NATO campaign is Operation Unified Protector which protected Libyan civilians from Qaddafi’s regime. The United States trained with the participating nations prior to this campaign, which led to a successful military outcome.

Local Community Partnerships – This tertiary effect of foreign training programs is hard to measure, but the positives should not be discounted. Communities that are geographically isolated and less likely to have interactions with foreigners gain a different perspective when they can live next door to or send their kids to school with a foreign family member. Many US bases are geographically isolated; foreign training programs provide an opportunity to build relationships and partnerships with foreign military members. Conversely, the same holds true when US military members serve or train outside the United States. As an example of local community partnerships, ENJJPT country sponsors help foreign instructors and student pilots assimilate into and understand the United States’ culture during their service in the U.S.

Emerging Training Opportunity: As organizations and panels recommend and allocate significant resources toward emerging technology and emphasize it inside the National Security Council, incorporating Artificial Intelligence and space training alongside allies and partners to counter China’s technological influence is a must. This training will break down barriers by challenging legacy classification standards, opening new horizons to the partners.

The Department of Defense and the Defense Security Cooperation Agency should partner with the Department of State to identify additional training opportunities that advance U.S. interests. The only reference to training in the current NDS is, “We will train to high-end combat missions in our alliance, bilateral, and multinational exercises.” The Biden administration’s National Defense Strategy should go beyond this reference and include foreign training and exercises as a key sub-pillar nested under the Allies and Partners pillar. The sub-pillar could include references to growing training opportunities by a modest year-over-year growth through 2025 to increase capacity, capability, and interoperability to deter China, Russia, and other malign actors. To fund additional training and exercises, the FY22 National Defense Authorization Act’s Pacific Deterrence Initiative should allocate additional resources to the NDS training sub-pillar.

It is imperative the U.S. takes advantage of existing foreign training programs, opportunities, and exercises by strengthening and even expanding them. New opportunities are bound to arise as allies and partners are courted by the U.S. to mitigate China and Russia’s nefarious activity. Let’s seize the advantage to “lead with diplomacy” by training alongside our allies and partners in traditional and non-traditional methods. COVID interrupted foreign training partnerships and generally strained relationships. As the world emerges from the COVID slumber, the U.S. should harness the strategic training advantage by codifying it in the next NDS. Embracing a robust foreign training program mindset, as exemplified in North Texas at ENJJPT, will widen and strengthen the strategic training advantage the US, along with its allies and partners, has over our great competitors.

We should all look for emerging opportunities to strengthen relationships, partnerships, capability, capacity, and technological interoperability; foreign training programs are a great place to start.

Lieutenant Colonel Christopher P. Mulder, USAF, is a Senior Military Fellow at the Atlantic Council’s Scowcroft Center for Strategy and Security. A graduate of the United States Air Force Academy, he is a command pilot and engaged in leadership and national security issues.

The views expressed in this article are those of the author and do not necessarily reflect the official policy or position of the Air Force, the Department of Defense, or the U.S. Government.