The StrykerX Is Loaded Up With Lasers and Drones 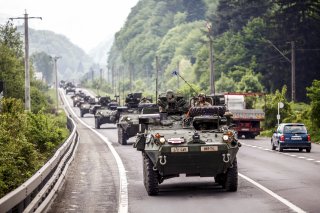 “As soon as we pick a battery or battery provider, you know, eight months, ten months, a year later, there's a new generation of battery with greater density, or greater transit throughput, power,” Tim Reese, director of U.S. business development at GDLS said in an interview with the National Interest.

The StrykerX vehicle will also greatly expand upon and upgrade several of the vehicle’s most cutting-edge technologies, such as its laser weapons, short-range-air-defense Stinger and Hellfire missiles, and 30mm cannons. Notably, it will have the ability to launch highly lethal “hunter-killer” surveillance and attack drones.

GDLS has been testing an integrated sensor-shooter drone system mounted on the vehicle itself. A small vertical-take-off surveillance drone called the Shrike 2, the drone launches from the turret of the vehicle to find and track enemy targets. Then, using a standard video data link, it can work in tandem with an attack missile to destroy the targets it finds. The technology is intended to expedite the sensor-to-shooter loop and function as its own “hunter-killer” system. Firing a 5 kilowatt laser, a Stryker vehicle destroyed an enemy drone target in prior testing, raising confidence that combat vehicle-fired laser weapons could become operational in the coming years.

The StrykerX demonstrator is also armed with an upgradable 30mm cannon, which can use a proximity fuse and fire high-explosive rounds, armor-piercing rounds, and air burst rounds. Also, while the .50-cal is often used as a suppressive fire "area" weapon designed to restrict enemy freedom of movement and allow troops to maneuver, the 30mm gun brings a level of precision fire to the Stryker that is currently unthinkable.

Dismounted infantry units are often among the first-entering “tip-of-the-spear” combat forces, which at times travel to areas less-reachable by heavy armored platforms such as Abrams tanks or Bradley Fighting Vehicles. Certain terrain or enemy force postures can also make it difficult for heavier armored vehicles to maneuver on the attack.

Common interfaces and interoperable technical standards may also allow Stryker developers to add new or upgraded weapons configurations to the platform, such as new anti-air missiles currently used in the Short-Range-Air-Defense program. SHORAD, as the program is called, currently fires Stinger and Hellfire missiles against mid-to-lower tier air threats from the Stryker vehicle, introducing an ability to track and destroy enemy drones, helicopters and even some low-flying fixed-wing planes.

Building upon what’s called SHORAD Increment 1, which arms the Strykers with a range of anti-air explosive weapons, the Army is fast-progressing with Increment 2 of its M-SHORAD program, an ongoing initiative to arm Strykers with 50-kilowatt laser weapons. This not only introduces new prospects for precision attack upon enemy drones, but also introduces an ability to attack and defend at the speed of light. Lasers, if properly and fully integrated with the requisite mobile electrical power, are inherently scalable, meaning they can be adjusted to fully incinerate and destroy enemy targets or merely disable functionality. The Army has been working with several vendors to refine and strengthen its Stryker-fired laser and expects to have it operational within just the next few years.

GDLS weapons developers say the Stryker lasers use Ku-band tracking radar to autonomously acquire targets in the event that other sensors on the vehicle are disabled in combat. With additional computing power, mobile electrical power, and improved command and control systems, the StrykerX will likely be in a position to add much more powerful lasers to the platform as the technology matures.  Lasers can also enable silent defense and attack, something that provides a substantial tactical advantage, as it can afford Stryker vehicles the opportunity to conduct combat missions without giving away their position. StrykerX developers will also add an electronic warfare jamming system intended to take out the signal of enemy drones.