Study This Fancy Photo: This Might Be Russia's Next Deadly Warship 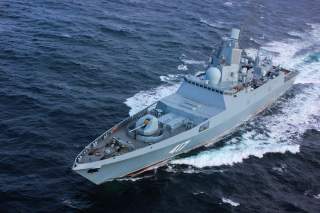 The Admiral Gorshkov class, also known as Project 22350, was to mark the inception of a new, post-Soviet generation in Russian shipbuilding. But development stalled with the Crimean annexation of 2014, when the Ukrainian defense industry refused to supply further engines for the Project 22350 line. Admiral Gorshkov’s commissioning date was pushed all the way back to 2018, casting doubt on the long-term viability of the entire class.

The Russian Navy proposed a fast, cost-effective solution to their Admiral Gorshkov predicament: to relaunch Project 22350 as a modernized “22350M” line, boasting several improvements to compensate for all the lost years in Admiral Gorshkov’s development cycle.

Though a detailed timeline has yet to be provided, Russian defense industry insiders seem optimistic about the progress made so far: "The Northern design bureau has completed designing frigates of Project 22350M and is now developing working design documentation for these vessels in line with the customer’s tactical and technical order,” a source tells Russian state news agency TASS.

The same article goes on to offer additional details that paint Project 22350M in a much more ambitious light than previously supposed. Whereas earlier reports focused on the typical modernization kit of improved radars, sensors, and onboard electronics, we are now finding out that Project 22350M will boast vastly greater firepower over its 22350 predecessor. The original Admiral Gorshkov flagship carries sixteen Kalibr-nk cruise missiles, while 22350M vessels will support a whopping forty-eight of the latter.

This massive armament upgrade is accompanied by an equally considerable displacement (vessel weight) difference: whereas the 22350 line comes in at 4,500 tons, 22350M vessels will have a displacement of 7,000 tons. While the added weight goes a long way in explaining how Russian engineers will make room for thirty-two additional cruise missiles, this raises new questions surrounding the purpose of the 22350M line.

7,000 tons is well in excess of average Frigate displacement; for reference, Soviet-made Udaloy-class destroyers are also around 7,000 tons and are likewise capable of deploying Kalibr missiles. This invites the speculation that Project 22350M is actually a line of destroyer-class vessels, meant for a different use-case than its smaller, less powerful 22350 frigate counterpart. If true, then Project 22350M could instead be intended as a replacement for Russia’s upcoming Lider-class destroyers. The Lider class overlaps with Project 22350M to such an extent that there is a serious cost-benefit question to be asked: can Project 22350M deliver similar performance at a fraction of Lider’s approximately $1.5 billion cost per unit? This does not factor in the R&D costs of research and developing a new destroyer class, whereas Project 22350M is built on the already-established foundation of its smaller 22350 cousin.

This idea is being actively entertained in Russia. As highlighted by Navy Recognition, key Russian defense industry officials are openly framing Project 22350M in precisely this way: "they have more powerful armaments and can operate as destroyers,” said United Shipbuilding Corporation Vice President for military shipbuilding Igor Ponomarev at a St. Petersburg Naval conference last year.

It is far too early to write off the Lider-class project. Still, the recent revelations surrounding the 22350M line speak to an alternative, if not faster and cheaper, Russian path to a modern destroyer.