Study This Gun: The H15 Submachine Gun Was Way Ahead of Its Time 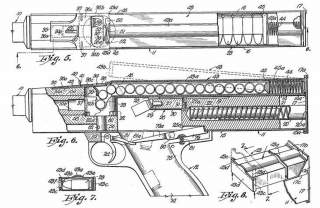 Developed by engineer and inventor John Hill, the Hill H15 submachine gun was decades ahead of its time. The H15 inspired the successful FN P90 but the Hill gun itself faded into obscurity.

Hill began developing the idea for his futuristic-looking gun in the late 1940s, but it wasn’t until the early 1960s that he built his first prototypes.

The H15 fed from unique, clear-plastic single- or double-stack magazines which loaded into the top of the receiver. This magazine came pre-loaded and sealed with an aluminum cap.

Magazine capacity varied with length. The H15 was chambered in 9×19-millimeter and .380 ACP and was meant to be fired as a pistol. Its rate of fire was approximately 400 to 500 rounds per minute, making it quite controllable.

It did not have a semi-automatic capability and had very few controls, with a non-reciprocating charging handle and an unusual ambidextrous crossbolt safety with the safe position in the center.

The visual similarities to the FN P90 are obvious. They both utilize a horizontal, longitudinally mounted feeding system. The main difference being that a “transfer disk” or “turntable” feeding system is incorporated into the action of the H15 rather than the magazine, as with the P90, which has a spiral feed ramp rather than the turntable.

Another shared characteristic is the weapons’ ejection. Both drop spent cases from the bottom of receiver through the grip. These similarities are likely more than coincidence, however. Hill was invited to the FN factory in Liege in 1963 and left a prototype of his submachine gun with FN for a number of years, which FN’s engineers no doubt photographed and examined before returning.

It’s very likely that FN took design cues — if not specifics — from Hill’s design, as two of Hill’s patents are cited in FN’s patent for the P90′s feed system.

The H15 weighed approximately 4.5 pounds unloaded with a metal receiver and plastic grip. In December 1953, the U.S. Ordnance Corps examined Hill’s design at the Springfield Armory in Massachusetts. The gun at Springfield — which Frankford Arsenal in Pennsylvania apparently produced — had a more conventional wooden stock with the trigger at the rear, but still ejected downward near the front of the stock.

Interestingly, the prototype that Springfield evaluated appeared to use an instantly recognizable MP40 barrel.

The Ordnance Corps decided it wasn’t interested in the design, no doubt because thousands of old M3 submachine guns were still in the U.S. Army’s inventory. Hill made some overtures to law enforcement agencies, but ultimately the H15 never entered service with any agency or military

In the course of his sales effort, Hill approached several manufacturers. FN initially expressed interested in the design but dropped the project in 1965 due to the lack of interest from paying customers. At the time, FN was producing license versions of Uziel Gal’s Uzi submachine gun.

Hill also approached Colt, which estimated that the gun might cost $30 to $40 to manufacture.

From 1953 through the early 1960s, the U.S. government granted Hill a number of patents covering elements of his design. Individuals and private manufacturing companies including FN scooped up the patents, but no one ever attempted large-scale production of Hill’s weapon. Of the hundred or so that various arsenals built in small batches, perhaps only a dozen remain in working order today.