Study This Picture: Iran Has Made Some Upgrades to Its F-14 Tomcats 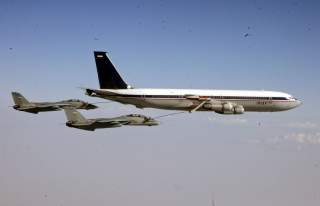 Iran says it has succeeded in upgrading a Grumman F-14 Tomcat and return it to service.

The country has also overhauled a F-7 and PC-7.

Noteworthy as we have recently explained IRIAF F-14s can carry several types of air-to-air missiles.