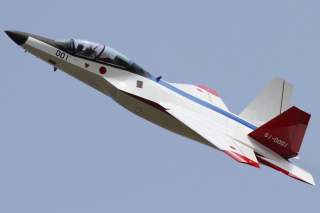 Key point: Tokyo is debating what kind of domestic jet is wants to produce and whether it is worth the cost.

On April 22, 2016 a sleek white jet with red and blue details taxied down the runway of Nagoya airport in Japan and took off. Japan had just become the fourth nation to develop its own stealth jet, the Mitsubishi X-2 Shinshin.

Two years later, after completing only thirty-four out of fifty planned test flights, the Shinshin (“Spirit of the Mind”) may be retired early. The Japanese Self Defense Force is now forced with making the critical decision on whether to home-build their next-generation stealth fighter or order one from abroad. New reports suggest that Tokyo is leaning towards the latter option.

Exit the Raptor, Enter the Shinshin

Japan has a Self Defense Force (JASDF) rather than a conventional military, which means that its armed forces are entirely geared towards defending the island nation from air and sea attacks. This task has become more daunting due to China’s large air force, huge arsenal of medium-range ballistic missiles and rapidly expanding fleet. Every year, Japanese fighters intercept Chinese and Russian military aircraft on hundreds of occasions. Japanese anxiety is heightened by the appearance of the fifth-generation J-20 stealth fighter in Chinese service, challenging the qualitative edge of the JASDF’s F-15 and F-2 (domestically produced F-16) fighters.

At the turn of the century, Tokyo really wanted to purchase the U.S. F-22 Raptor stealth fighter. Considered by many to be the best air-superiority platform ever made, the Raptor comes with a stiff price to match its premium capabilities. However, an act of Congress explicitly banned the F-22 from export and the Raptor production line was closed prematurely. Instead, the JASDF is making do by accepting forty-two F-35A stealth fighters into service—though these are not as capable as air superiority fighters.

The diminutive X-2 measures only fourteen meters long and has a wingspan of nine meters. This small size is possible because, as a demonstrator, the X-2 isn’t designed to carry any weapons and weighs only 10.5 tons (or 14.4 fully loaded). By comparison, even the light F-16 fighter weighs 18,900 pounds empty.

Instead of using radar-absorbent coatings, the Shinshin is made out of nonreflective silicon carbide and ceramic, and even its bubble canopy is made out of a special tin alloy. Furthermore, its surface uses a mixture of sawtooth edges, chines and irregular curves to reduce radar reflectivity; its tail fins are also canted outwards at a steep angle.

A Japanese defense official claimed in an interview that Shinshin “‘looks no bigger than a giant beetle viewed from ten kilometers away.” This echoes statements from the U.S. military that the F-35 has the radar cross section (RCS) of a golf ball, and the Raptor, that of a bumblebee. However, some military observers are less optimistic about the X-2’s RCS, and believe it to have more intermediate-level stealth capabilities comparable to the Chinese J-20—particularly due to the configuration of its vector-thrust engines.

The jet’s two IHI XF5-1 low-bypass turbofans are the first Japanese-made jet engines equipped with afterburners, and are built out of a mixture of heat-resistant ceramic matrix composite and titanium aluminide alloy. The exhaust nozzle of each engine is equipped with three paddles that allow it redirect thrust three-dimensionally (both vertically and horizontally), enabling the X-2 to pull off exceptionally tight maneuvers. A production aircraft fighter replace the paddles with moving exhaust nozzles to reduce the radar cross section.

Though the engines on the X-2 individually only produce 5,500 pounds of thrust each, due to the X-2’s light weight, they are still sufficient to boost the aircraft to over twice the speed of sound—or sustain supersonic flight without the use of afterburners, a capability known as super-cruise.

The Shinshin also reportedly integrated other Japanese-developed technologies. Modern jet fighters use ‘fly-by-wire’ control systems rather than hydraulics—and Mitsubishi has gone one step better by using fiber-optics, which transmit data more rapidly and would be resistant to electromagnetic attacks. The X-2 also reportedly boasts ‘a Self-Repairing’ control system which detects damage to the aircraft’s control surfaces (elevators, stabilizers, etc.) and automatically adjusts the aircraft’s handling to compensate.

From Demonstrator to Fighter: the Mitsubishi F-3?

The Shinshin is a tech demonstrator, not a prototype intended to evolve into a production aircraft. And it’s a lot simpler to develop an unarmed jet than a warplane capable of carrying thousands of pounds of weapons, computers and electronic warfare systems.

Such a home-designed stealth fighter, dubbed the Mitsubishi F-3, remains in the early concept phase. The Japanese defense ministry has made it clear that it is looking for a large, twin-engine stealth jet capable of carry six long-range air-to-air missiles internally to begin production in 2027. Over a hundred such aircraft would replace Japan’s aging F-15J and F-4EJ Phantom interceptors.

Of two publicly available concept drawings, one resembles the F-22, while the other appears to be a tailless sixth-generation design—like the proposed Boeing F-A-XX. The aircraft would apparently wield an advanced Multi-Function Radar that would not only detect approaching aircraft, but function as an electromagnetic sensor and possibly even a microwave weapon for disabling adversary’s electrical systems.

However, in April 2018 Reuters reported that anonymous Japanese defense sources revealed that Tokyo was likely to put development of a domestic stealth fighter on hold in favor of finding a partner abroad. Unless funding is included by June of 2018, the F-3 won’t make it onto Japan’s next five-year defense plan.

The reason? Cost—and implicitly, risk. Japan estimates that developing its own stealth fighter would cost $40 billion…in initial costs. For comparison, Japan’s entire annual defense budget in 2018 was $46 billion—and that was the largest on record.

And as the United States discovered while developing new technology for the F-35, lots of things can go unexpectedly wrong, causing delays and cost increases. Thus, it may be more prudent to invest in existing technologies—ones that have been refined at another nation’s expense—than assume the risk of building a hopefully better version from scratch.

The Other Path: An Raptor/Lightning Hybrid?

Tokyo has submitted Requests For Information (RFIs) to BAE Systems, Boeing and Lockheed Martin inquiring about the possibility of jointly developing a new stealth fighter. One of the more intriguing proposals is creating a hybrid of the Raptor and the newer F-35 Lightning II.

Japan had been more enamored with the F-22 because it is much more capable in the air superiority role than the F-35—and the JASDF cares much more about air-to-air capabilities. However, the Raptor remains saddled with a 1990s-era computer system that is not amenable to inexpensive upgrade, and uses a pricy radar-absorbent-material (RAM) coating. Most importantly, it is no longer in production. The F-35, meanwhile, has introduced more cost-efficient RAM paneling, and features advanced sensors and computer systems that allow it to network targeting data with friendly forces.

Therefore, Tokyo is proposing a new plane that combines the advanced new features of the F-35 with the superior flight characteristics of the F-22. This would seem to offer the ultimate stealth fighter yet—but it would come at a staggering cost. A leaked Pentagon study concluded that reopening the F-22 production line—and likely upgrading some of its more outdated systems—would cost at least $7–10 billion to startup, followed by an eye-watering $210 million per plane for an order of 194, for a total of roughly $50 billion.

While a deal brokered with Japan might shave some of the cost, the initial price seems comparable to that of developing a new design from scratch—though it would come with less risk, as it would be leveraging technologies already refined in two existing aircraft. The U.S. Air Force may also pitch in to expand and improve its fleet of 180 F-22s, though defense lobbyists will be inclined to oppose any diversion of funds from the F-35.

The possibility of a truly domestic Mitsubishi F-3 stealth fighter based on the Shinshin may remain as a backup option. Tokyo would certainly prefer to have domestic manufacturing and ownership of stealth technology. Despite the serious efforts invested in the X-2 demonstrator, the JASDF has currently concluded that it can obtain the fifth-generation stealth fighters it desires more reliably, cost-efficiently and quickly by finding an overseas partner.

Sébastien Roblin holds a master’s degree in conflict resolution from Georgetown University and served as a university instructor for the Peace Corps in China. He has also worked in education, editing and refugee resettlement in France and the United States. He currently writes on security and military history for War Is Boring. This first appeared in April 2018.