Stun Guns vs. Tasers (Yes, There Is a Difference) 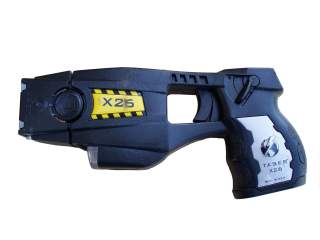 I’ve always wondered why stun guns are called such when they don’t really look, much less function, like any gun. A Taser device on the other hand typically looks and handles like a handgun and fires two prongs from a short distance, but I don’t think I’ve ever heard of anyone referring to it as a stun gun.

Yes, both deliver non-lethal, super-high voltage electric shock to incapacitate a target, the only thing seemingly different between each platform being their method of delivering electric shock. But would either be enough for self defense?

Read on if you want to know more.

We often see the words “volts”and “amps” when we look at any electronic device manual.

The volt as a unit of measurement used in electronics is a pretty tricky concept to grasp, especially for people who have no background in electronics. I know I’ve had a bit of an issue with it in high school. To spare everyone the difficulty, let’s do an analogy.

Imagine a railway track between two points A and B. At point A, there are an infinite number of rail carts and a worker is tasked to push them from point A to point B until he gets tired, at which point in time he will have to be replaced by another worker who will continue pushing the carts.

The job requires that carts keep moving from A to B, each time hitting a big steel plate positioned in the middle of the track.There’s also a wheel stop somewhere on the track, if the boss wants whoever’s working to stop pushing carts down the track all he needs to do is activate the wheel stop.

The frequency at which the rail carts are being pushed is the amperage (work done per unit time, measured in amperes). The rail cart that does all the work, for now we’ll call the “coulomb” and the energy that the worker exerts, for now we’ll refer to as “joules”.

And finally, the steel plate is the task’s objective, i.e. the target of the electric shock.

Volt, as a unit of measurement, is defined as joules (energy) per coulomb (cart). In the analogy above, a battery (worker) is required to push the cart to hit the steel plate (the target) between points A and B (the two prongs on the device). When the boss (the person holding the device) disables the wheel stop (pushes the switch), assuming everything is in order, work (applying voltage to the target) is done.

On average, the human body can generate anywhere from 10 to 100 millivolts.

The way our nervous system works is, neurons, or the nerve cells that carry electrical impulses, communicate with each other by sending signals, moving those across the synapses (gaps between the neurons) using chemicals known as neurotransmitters.

Signals are directed from the brain to the body via the spine. For instance, if you burn your finger, neurons fire electric signals to your brain which interprets the pain as a burning sensation.

It is important to note that in any electronic control device (ECD), it isn’t so much the voltage that matters but the current (amperage). Voltage only gives the push such that a specific device would be effective enough to go through clothing, but it’s the frequency at which the voltage is delivered that results to incapacitation.

To put things in better perspective, a 110v wall outlet that can deliver many amperes of current indefinitely will result to someone being burned to a toast. A 50,000v Taser device can only deliver around ~4 milliamps (only four hundredths of an ampere) of electric current for a few seconds. Even with its high voltage, the infinitesimal amperage will not kill the target.

Named after the city in Netherlands where the Dutch inventor originated, the Leyden jar works a lot like modern day capacitors, the main difference between the two being the latter had to release stored electricity quickly.

On a glass globe was a large wool pad which would have to be spun quickly to store a static electrical charge inside a connected Leyden jar. The person handling the jar had to be careful not to electrocute themselves.

Pieter van Musschenbroek discovered that his invention can be used to electrocute an individual when he accidentally shocked himself with it. He described the sensation as being struck by lightning — it was so painful he thought it would kill him. It left his body shaking afterward.

In 1780, an Italian philosopher, physicist, biologist and physician, Luigi Galvani, started a series of experiments. He found that the electric current from the same Leiden jar could cause contractions in dead animals when applied directly to muscle or nerve.

Two decades later, the first modern day battery was invented by another Italian physicist, Alessandro Volta (the unit of measurement mentioned above, energy per coulomb in “volt”, was named after him).

This battery was eventually used in cattle prods — hand-held club-like devices used by cattlemen which utilize electric shock to deliver massive amounts of electricity just painful enough to shock a cow’s rear end to get it to walk into a chute.

In 1933, a Cuban inventor by the name of Cirilo Diazcame up with an electric glove which uses a half-pound battery worn on the belt, all wires connecting it to the glove concealed beneath clothing. These “stun gloves” could deliver up to 1,500 volts and were intended for Cuban police forces to quell riots.

To this day, electric shock devices similar to cattle prods are still being used. The smaller versions are generally referred to as stun guns.

In the early 1960s, race riots and anti-war protests (as a result Americans being torn apart over the Vietnam war) were very common in the US and the police were still using cattle prods. President Johnson ordered the development of a more effective non-lethal weapon to subdue protesters.

It was around this time that an American nuclear physicist, Jack Cover, started developing the Taser device after reading in the news about about a man who survived being immobilized for several hours by a fallen power line.

Jack studied bioelectricity and learned that there are trillions of electrical impulsesmoving through nerve fibers back and forth between the brain and all sensors in the body.

He then made calculations and come up with his first crudely designed hand tool made from ordinary household items (bicycle parts, plastic tubing, etc.) to come up with the first prototype.

For the device to work properly, it has to deliver just enough voltage and current enough to make muscles contract but not enough to damage the body. To be portable, it should use electricity stored in a battery, and to make it effective at relatively longer, safer distances, it had to deliver electric shock via two dart-like projectiles propelled by gunpowder charges.

As soon as both projectiles hit the target, an electrical circuit is formed which delivers a shock that disables the target’s body.

He completed a prototype electroshock weapon in 1970 and named it after a novel he read as a child which inspired him decades ago to come up with the same weapon the novel’s protagonist, Tom Swift, used — Taser, an acronym for Thomas A. Swift Electric Rifle (though it’s not really a rifle and Tom Swift didn’t have a middle initial).

The first test subject was a buffalo from a local animal park. Jack was able to take it down using his prototype Taser. It immediately got back to whatever it was doing as soon as the weapon stopped cycling.

Then he tested it on himself (by making his sons shoot him) and it worked. His sons also volunteered to be parts of the test by subjective themselves to the same electric shock.

In 1974, Jack Cover’s Taser TF1 was patented and production began that year. But shortly after, the Bureau of Alcohol, Tobacco, Firearms and Explosives (ATFE) classified the TF1 as a firearm due to the gunpowder required to launch the wired dual-dart  projectiles, making it unavailable to the civilian market and discouraging police and military sales, which led to low sales and ultimately resulted in the demise of the product.

Fast forward to 1993, two brothers, Tom and Rick Smith, were looking to develop an alternative method of self defense after their high school friends were gunned down in a road rage incident. Having learned of the Taser TF1, they implored the guidance of Jack Cover.