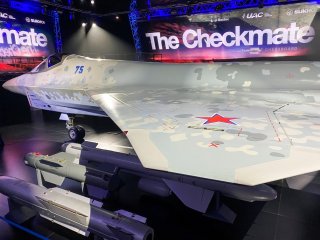 Mikhail Strelets, the Checkmate’s chief designer, told TASS that the Su-75 project had its roots in the Russian military’s experience over the course of Moscow’s intervention into the Syrian Civil War. Russian leadership concluded that the strike role played by the Su-35 in Syria could have been filled by a cheaper fighter with a smaller footprint.

“An analysis of the use of air strikes in Syria revealed that the capabilities of heavy twin-engine aircraft systems turned out to be overly excessive for carrying out most tasks,” Strelets said, according to TASS.

Strelets also confirmed that the Checkmate derives its design language from the Su-57 fifth-generation air superiority stealth fighter. The Checkmate also boasts a degree of component overlap with the Su-57, notably including the cockpit and avionics suite.

“The tendency of harmonizing aircraft inventory is on the rise,” he said. “Due to a high level of inter-project harmonization, the joint operations of the Su-57, the Checkmate, and unmanned aerial vehicles may form an optimally balanced fleet for various tasks with a minimum operating cost and high combat potential.”

Yury Slyusar, Director General of Russia’s United Aircraft Corporation (UAC), said the Checkmate is intended as “a platform for an entire family of aviation systems.” Slyusar reaffirmed Moscow’s plans to design both an unmanned Checkmate variant. It had previously been reported that manned and unmanned Checkmate aircraft will be able to operate in the same squadron.

“The jet will be capable of sharing information and providing target designation to other air platforms and unmanned aerial vehicles,” he said. “The use of the unmanned modification of the new aircraft will introduce a new method of tactics,” he added.

The Checkmate fighter was unveiled by Russian defense-industrial giant Rostec during the MAKS-2021 airshow in Russia. The TASS infographic confirmed that the fighter will boast a top speed of 2,200 kilometers per hour and maximum flight range of 2,800 km. The standard Checkmate variant has a combat payload of 7,400 kg spread across five hardpoints in internal weapons bays and six external pylons. In keeping with its multirole design, the Checkmate is compatible with a wide range of armaments including air-to-air missiles from the RVV family, the Kh-59MK2 guided missile, and Kh-35UE anti-ship missile, as well as numerous guided/unguided bombs and unguided rockets from the S-8 series.

Rostec executives initially suggested that the Checkmate could have a per-model cost as low as $25 million, but the infographic says that the fighter will start at $30 million prior to any customer-specific modifications. Russian defense industry officials believe that the Su-75  is positioned to compete favorably with the likes of the Dassault Rafale and JAS-39 Gripen by virtue of its aggressive pricing model, robust weapons loadout, and fifth-generation features. Three hundred Checkmate models are expected to be produced for export purposes, with India, Vietnam, and several African states identified as potential customers.