This Submarine Is "Invincible": Check Out the Super Quiet Sub Headed Near China 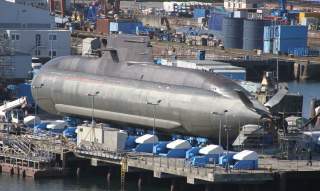