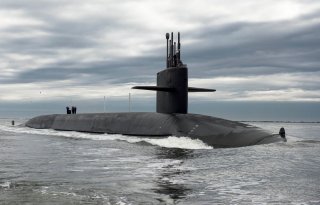 The Ohio-class is divided into two groups by role—nuclear-armed ballistic missile-capable subs, and cruise missile hulls that fire conventionally-armed missiles.

Each submarine in the Ohio-class has two full crews, ensuring that a fully-trained crew is always on hand for every contingency, preventing any patrol tempo slowdown due to sickness or other human factors.

The last 14 hulls in the Ohio-class retain their original sea-based nuclear deterrence role and go on two to three-month deterrence patrols. As a part of the United States’ nuclear triad, they carry the Trident II ballistic missiles. These missiles are nearly global in reach—they have an estimated range of 12,000 kilometers, or nearly 7,500 miles.

Every Trident missile can carry up to eight Multiple Independent Reentry Vehicles. Each vehicle, or MIRV, can carry a 100 or 475 kiloton nuclear warhead. For comparison, the two nuclear weapons the United States dropped on Hiroshima and Nagasaki during World War II were 15 and 20 kilotons respectively, making the Trident II significantly more powerful.

As I wrote previously, the Trident missile program forms the backbone of both the United Kingdom’s and the United States’ sea-based nuclear deterrence and exemplify London and Washington’s “Special Relationship.”

Both the American Ohio-class and the British Vanguard-class were designed to carry Trident II nuclear ballistic missiles. The Trident II missile system is slated for replacement in American service in 2042, and sometime in the 2060s or later in British service.

In the mid-1990s, the Ohio-class’ role was reaccessed. Due to the collapse of the Soviet Union, nuclear deterrence patrols were needed less frequently, as the threat from Russia had significantly lessened. The first four hulls of the Ohio-class were therefore redesignated as SSGNs, or nuclear-powered guided-missile submarines.

These four Ohio-class hulls, the oldest of the class, were covered to carry conventionally-armed Tomahawk missiles rather than Trident missiles. These converted subs can also serve as delivery platforms for special operations teams. SEAL or Marine teams can board an attached midget submarine, the Advanced SEAL Delivery System, while the Ohio-class subs are underwater for special operations missions.

The oldest Ohio-class submarine will reach the end of its service life in 2029, and the Navy would like a replacement submarine ready by then—the Columbia-class. The Navy decided on a new hull design as the most cost-effective replacement for the Ohio-class, as the Columbias will not require a lengthy and expensive mid-life nuclear core refueling—which can take up to two years—but will instead be operable for the duration of their service lives, ensuring a higher patrol tempo.

If replacement goes according to schedule, then the oldest Ohio-class submarine will have served in the U.S. Navy for 45 years—nearly half a century. A great run for some of the most powerful submarines the United States ever built.