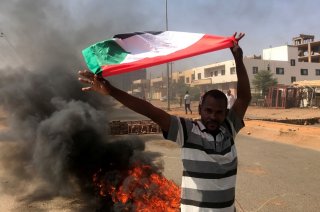 In a joint statement, the United States, United Kingdom, Saudi Arabia, and United Arab Emirates (UAE) condemned the October 25 coup d’etat in Sudan, calling for an immediate return to civilian rule and requesting the release of all prisoners captured during the takeover.

“We call for the full and immediate restoration of its civilian-led transitional government and institutions,” the statement, released by the U.S. Department of State, read.

“Violence has no place in the new Sudan,” the statement continued. “On this point, we encourage an effective dialogue between all parties, and we urge all to ensure that the peace and security for the people of Sudan is a top priority.”

The departure from the two Arab monarchies’ previous stance—which merely called for stability in the country, without explicitly condemning the military’s takeover—is significant, as both of them have long-standing ties with the Sudanese military. During the thirty-year rule of Omar al-Bashir, the Sudanese dictator who was overthrown by the military after months of civilian protests in early 2019, Sudan participated in the Saudi-led coalition’s war in Yemen and was widely credited with helping to turn the tide in significant battles there. The country continued its participation after al-Bashir’s ouster, bolstering relations with Riyadh and Abu Dhabi in the transitional government’s early months.

In the run-up to the coup, it was widely rumored that the two Arab states would have preferred a pliable military government in Sudan over an unpredictable civilian one, which could lead to protests.

The United States and United Kingdom explicitly condemned the coup on the day it occurred. Shortly thereafter, Washington froze a $700 million aid package to Khartoum, conditioning its release on the restoration of civilian rule in Sudan. Other countries, such as Germany, also suspended aid, as did the World Bank. At the same time, the African Union suspended Sudan until Abdalla Hamdok, a former UN official who served as the country’s prime minister from 2019 until the coup, was restored to power.

Abdel Fattah al-Burhan, the Sudanese general who led the coup, has defended his actions during the coup by claiming that it was necessary to preserve the country’s stability—the fact that hundreds have been killed or injured in protests against him notwithstanding.

Burhan indicated that he intends to appoint a technocratic government, and has suggested that Hamdok lead it once again. Hamdok, however, has refused to cooperate with Burhan until “all [...] constitutional institutions [are] restored [to their status] before Oct. 25,” according to a Hamdok-linked Facebook page’s statement.