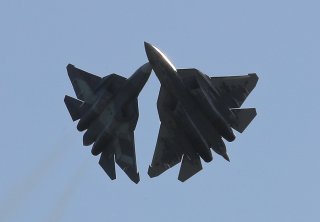 Moscow has touted the capabilities of its fifth-generation Sukhoi Su-57 multirole fighter for nearly a decade. While the development of the aircraft actually began in 2002, progress was slowed due to financial constraints in Russia and it wasn’t until January 2010 that the combat aircraft even made its maiden flight.

Russian state tech conglomerate Rostec announced this week that it is now on track to deliver more than seventy Su-57s to the Russian Air Force by 2027. Several will even be delivered this year. The comments from Rostec were in response to an article from the National Interest, which said the fifth-generation stealth fighter “is unlikely to enter operational service before 2027.”

Rostec’s statement was reported by TASS, a news agency owned by the Russian government.

“The Russian fifth-generation planes do not make the West feel easy,” Rostec said in a statement as reported by TASS. “Su-57 and Checkmate fighters regularly become the focus of fake news. Untrue facts that have nothing to do with reality are published. The plane is already being serial-produced and delivered! Over 70 aircraft will be delivered by 2027, including several fighters this year.”

Most media reports indicate only a dozen of the aircraft were delivered as of last year. That includes 10 test prototypes and two that were serially produced. It is unclear how many—if any—have actually been delivered in 2021. TASS reported that Russia’s Aerospace Force will receive 22 Su-57 fighters by late 2024 and 76 by 2028.

Russia has proclaimed multiple times that the aircraft’s arrival was pending, but its track record on the subject remains shaky.

When the aircraft will arrive remains in question. Delays with new military hardware are common. Still, the Su-57 should be seen as a very capable aircraft.

The Sukhoi Su-57 multirole fighter is designed to destroy all types of air, ground, and naval targets. The fighter jet features stealth technology with the broad use of composite materials. It is also capable of reaching a supersonic cruising speed and is furnished with the most advanced onboard radio-electronic equipment, including a powerful onboard computer (the so-called electronic second pilot), while the aircraft’s radar system is spread across its body. The Su-57’s armament is also placed inside its fuselage, much like the American-made F-35 Lightning II.

The cost of the Su-57 has remained an issue for Moscow. At a rough per-model cost of around $40 million, the Su-57 packs sophisticated avionics, class-leading aerodynamics, and a formidable weapons suite into a relatively affordable package. Even then, the Su-57 could still occupy a sizable chunk of Russian defense spending. The Kremlin has been keen to offset where possible through a series of high-profile export contracts, but few foreign buyers have stepped up. That could be one factor in why the aircraft’s arrival remains pending.