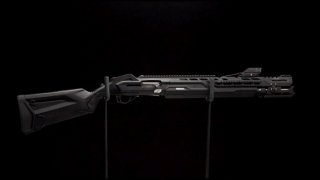 The Russian-based Kalashnikov Group continues to produce the ubiquitous AK-47 and dozens of other advanced small arms, but the company announced this week that it would begin to take pre-orders for its newly developed “smart shotgun.” Dubbed a cyber weapon, the MP-155 Ultima was first introduced at last year’s Army-2020 International Military-Technical Forum and was also displayed during the Abu Dhabi IDEX 2021 exhibition.

“We are presenting the newest SMART shotgun MP-155 Ultima,” the company announced via a statement reported by TASS. “It is already available for pre-order at Kalashnikov.Market.”

The Ultima is based on the reliable classic MP-155 semi-automatic hunting shotguns and features an onboard PC with a digital display, clock, compass, stopwatch, timer, shot counter, and cartridge remaining indicator. The firearm’s computer can reportedly be synchronized with various external devices via WiFi connection, including a rail-mounted camera that can record and even stream Full HD videos. Images from the camera can be transmitted in real-time to a smartphone.

The chassis of the shotgun also features a USB-C port for connecting other devices.

The external elements of the MP-155 Ultima are made of aircraft-grade aluminum alloy and high-tech polymers. The preliminary price of the new weapon is approximately 130,000 rubles ($1,760 U.S.). While Russia doesn’t have a military service comparable to the U.S. Space Force so far, if it ever does send armed cosmonauts into space, they’d probably be armed with something like the MP-155 Ultima.

The other big announcement this week from the Kalashnikov Group was that it would unveil a prototype of its now under development 9mm PPK-20 submachine gun (SMG) at Army-2021. The new small arm, which is essentially a modernized PP-19-01, was independently designed as a part of the ‘Vityaz-MO’ R&D project. The PPK-20 has completed state trials, and is now awaiting the final decision of the Ministry of Defence of the Russian Federation in regards to adoption by the Armed Forces, the Kalashnikov Group said on Sunday.

Following the trials, the firearms manufacturer is set to start production of the new SMG, which can serve as a Personal Defence Weapon (PDW), a firearm for combat vehicle crews or various support units, and for Special Forces units that operate in urban areas, inside structures and vehicles, and in crowded environments. It is a compact weapon that is just 41cm in length with its buttstock folded.

The Kalashnikov Group reported that, in trials, when used with 7N21 ammunition, the PPK-20 could penetrate Level 3A body armor (NIJ standard). “With this round, the muzzle velocity of the PPK-20 is nearly 470 m/s, and the point-blank range at a full-height target is 360 meters,” the Kalashnikov Group added. It is fed from a thirty-round box magazine.

In addition to likely being adopted by Russia’s Ministry of Internal Affairs, the Federal Security Service (FSB), and Federal Protective Service (FSO), the Kalashnikov Group is likely looking to market the SMG to foreign customers.