This Super Russian Spy Submarine May Have a Very Special Feature 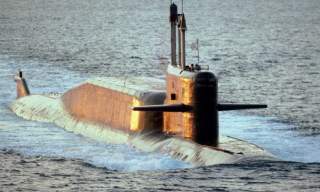 Podmoskovie is also thought to be able to host the secretive AS-12 Losharik — a nuclear-powered mini-submarine designed for intelligence and special operations missions at extreme depths — perhaps as great as 20,000 feet.

In August 2016, the Russian ballistic missile submarine Podmoskovieslipped out of its pier at Severodvinsk for the first time in 16 years. But the vessel— which was commissioned in 1986 as a Project 667BDRM Delfin-class (NATO: Delta IV) SSBN — is no ordinary boomer.

Over the course of nearly two decades, the massive submarine was modified to conduct special missions. But exactly what those missions might be remains somewhat of a mystery.

Podmoskovie was photographed leaving the shipyard for contractor sea trials on Oct. 22 by Oleg Kuleshov, who writes for the BMPD blog — a product of the Moscow-based Center for the Analysis of Strategies and Technologies.

Carter is roughly 100 feet longer than her two Seawolf-class sisters with the addition of a Multi-Mission Platform, which allows the submarine to launch and recover various unmanned vehicles, and also support special operations forces.

Podmoskovie is thought to be similar in concept — but the Russians are not exactly keen on sharing those details, for obvious reasons.

What is known about Podmoskovie is that the massive vessel entered the shipyard in 1999. By 2002, the boat had her missile tubes removed and the special compartments similar to those on Orenburg were installed.

Externally, Podmoskovie looks very different from a standard Project 667BDRM boat aft of the sail, and she appears to have had her hull lengthened.

Podmoskovie can launch and recover unmanned underwater vehicles, which dock on top of the submarine where the missiles used to be located. One such unmanned submarine is the Klavesin-1R — which was developed by Russia’s Institute of Marine Technology.

The unmanned submarine is able to dive to depths as great as 6,000 meters — or nearly 20,000 feet. The unmanned vessels are equipped with a variety of high and low frequency sonars

Podmoskovie is also thought to be able to host the secretive AS-12 Losharik — a nuclear-powered mini-submarine designed for intelligence and special operations missions at extreme depths — perhaps as great as 20,000 feet.

While very little is known about Losharik, the vessel is believed to be tasked with tapping undersea cables among its various other missions.

Additionally, Podmoskovie will almost certainly host the Paltus and Kashalot nuclear-powered special operations mini-submarines. Like Losharik, the Paltus and Kashalot are thought to have both research and military roles. However, due to the level of secrecy surrounding these programs, there is very little information available.

It will take some time for Podmoskovie to complete its various sea trials, but all indications suggest that she will be a capable addition to the Kremlin’s arsenal when she returns to operational service. Podmoskovie is expected to join the Russian Northern Fleet’s 29th Submarine Brigade when she rejoins the fleet.