Super Tuesday Question: Who Will Be Left Standing to Take on Bernie Sanders? 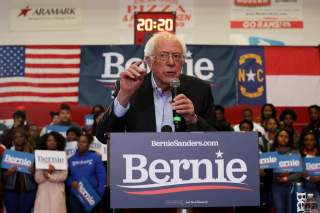 There is no more important date on the Democratic primary calendar than Super Tuesday, a day when a bonanza of Democratic voters in 14 states from California to North Carolina will go to the polls and cast a ballot for their favorite Democratic presidential candidate. 1,357 delegates will be awarded on March 3, one-third of the entire delegate heap. Many of the candidates have been preparing for this day ever since they declared their candidacies last year, even as some—like former Vice President Joe Biden—have been MIA for the past month.

No candidate can take Super Tuesday for granted. The polls look encouraging for Bernie Sanders, who has established himself as the presumed frontrunner after strong performances in Iowa, New Hampshire, and Nevada. But even Sanders, a man with a nationwide, grassroots movement, can’t be certain that he will sleep soundly at the end of the night.

However, when it comes down to it, it’s not Bernie Sanders who will have the biggest worries, but rather the moderate candidates of the center-left. Each one will be on pins-and-needles throughout the night. For the campaigns of Joe Biden, Pete Buttigieg, Mike Bloomberg, and Amy Klobuchar, Super Tuesday will be less about Bernie and more about each other. Next Tuesday will be nothing less than a contest to determine which moderate Democratic candidate will be left standing.

To date, the moderate lane has been crowded with four options, each of whom believes in their hearts that they are the most capable of going head-to-head with a rising Bernie Sanders. Buttigieg, the small-town mayor of South Bend, Indiana, has been making a play for that position with renewed vigor, taking on Sanders directly for what he views as his pie-in-the-sky, radical, totally unrealistic and hugely expensive plans for public education, healthcare, and the environment. Of every moderate on stage in South Carolina this week, Buttigieg was the one candidate who tried to use his time to bring the discussion back to Sanders, reminding everybody watching that not a single swing-state Democratic lawmaker has endorsed the senator from Vermont. Buttigieg wasn’t afraid to tell off Sanders, either. "Look,” Buttigieg said, "if you want to keep the House in Democratic hands, you might want to check with the people who actually turned the House blue: 40 Democrats who are not running on your [Sanders’] platform. They are running away from your platform as fast as they possibly can.”

Bloomberg was a little more tepid, with the multi-billionaire letting his money do the talking. The former mayor has spent over $190 million saturating the Super Tuesday states with television and radio advertisements talking up his candidacy as the best opportunity to prevent four more years of Donald Trump. He, too, views Sanders as a radical who would frighten away the majority of moderate Democrats who like their private insurance, support capitalism, appreciate the value of pragmatism and technocratism, and don’t want to turn on their TV’s to find out that their taxes are going up to pay for a cockamamie socialist healthcare plan.

Biden, who for many months was considered the safest choice for Democrats to defeat Trump, is attempting to switch the conversation back to electability and support across the entire spectrum of the Democratic primary electorate. Speaking to the Post and Courier on the eve of the South Carolina primary, Biden all but told some of his more moderate competitors to drop out of the race. "How do you stay in if you have demonstrated you can’t get any African American support?” Biden lamented. Of course, coming from somebody leading the polls in South Carolina by 20 points, this is a convenient thing for Biden to say. Yet the former vice president also makes a good point: if Buttigieg and Klobuchar are unable to attract the most reliable voting bloc in the Democratic Party, do these two Midwesterners have a right to stay in the race past Super Tuesday? How does a Democrat win the highest office in the land without the party’s core base of support?

Right now, all four moderate Democratic presidential candidates are spending just as much time punching each other as they are in taking shots at Bernie Sanders, who at this point in the race has the progressive lane to himself. There are two primaries going on: one between Sanders and the moderates, and one between the moderates themselves. It’s not a bad situation for Sanders to be in.

Super Tuesday, however, will see a big culling of the field. Depending on how the delegates are apportioned, the moderate camp could shrink from the current 4 to perhaps 2. Who those two moderate candidates will be is anyone’s guess. But don’t be mistaken: you won’t be seeing seven lecterns on the debate stage after March 3.