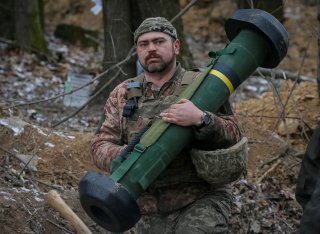 The Pentagon has shipped about a third of its stock of Stinger anti-aircraft and Javelin anti-armor missiles to Ukraine. The missiles have given the embattled Ukrainians an edge over Russia, but they will be difficult to replace anytime soon.

In testimony given before the Senate Armed Services Committee, the Department of Defense’s top acquisition official, Ellen Lord, explained the situation to lawmakers. The Pentagon won’t be able to replace Stinger anti-aircraft missiles “within the next couple of years,” as production lines for the Cold War-era missile have been shut down. She added that some simpler components for Stinger missile production could be hard to source.

Lord added that “we are probably five years” away from replenishing the stock of Javelins, even though the Javelin production line has not closed.

The chief executive officer of the Professional Services Council, David Berteau, concurred, saying, “We have yet to see a single contract in place” related to Javelin or Stinger missiles. Noting that a third of these missile stocks are depleted, he added that “we’re behind.”

This information comes on the heels of a recent visit to Ukraine by Secretary of Defense Llyod Austin and Secretary of State Antony Blinken. The show of support included an announcement of plans to reopen the U.S. embassy in Ukraine and was well received by Ukrainian leaders.

Secretary Austin said at a later meeting with allies at Ramstein Air Base in Germany that “Ukraine clearly believes that it can win, and so does everyone here.”

Secretary Austin added that Ukraine can count on the United States and its allies. “Ukraine needs our help to win today and they will still need our help when the war is over,” he said.

During a press briefing following his meeting with Ukrainian president Volodymyr Zelensky, Secretary Austin explained that the United States would send a massive shipment of American 155mm howitzers along with 155mm ammunition. Austin noted that allies would likely send more long-range fire equipment.

“We’re going to push as hard as we can as quickly as we can to get [the Ukrainian military] what they need,” the Secretary explained.

One stop-gap solution would be to relax weapon manufacturing regulations and allow other countries to build weapons to ship to Ukraine, a move that could significantly and quickly expand the Stinger and Javelin manufacturing base.

Another obstacle, however, could be the United States’ current elevated inflation rate. Contracts between the Department of Defense and private companies to build more Stinger and Javelin missiles would also have to take this critical economic factor into account.