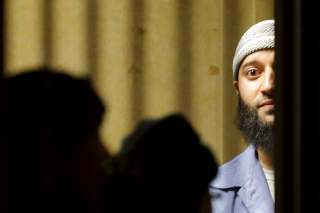 The Supreme Court refused to hear the appeal of Adnan Syed Monday, dealing a serious blow to his campaign to secure a new trial for the 1999 murder of Hae Min Lee.

The Supreme Court Monday declined to hear the appeal of Adnan Syed, whose 2000 conviction for the murder of Hae Min Lee has been the subject of intense public speculation and two major media projects.

The Maryland Court of Appeals turned down Syed’s bid for a new trial in April, prompting his petition to the high court. The justices gave no reasons for denying Syed’s petition, nor did they disclose a vote count, as is typical of orders of this nature.

“The evidence against Mr. Syed was overwhelming,” a spokesperson for Maryland Attorney General Brian Frosh told the Daily Caller News Foundation. “We remain confident in the verdict that was delivered by the jury and are pleased that justice for Hae Min Lee has been done.”

Syed’s lawyers told National Public Radio they will file a new appeal in Maryland state court on different grounds. They intend to focus on Syed’s sentence, and will argue he was not given a meaningful opportunity for parole. Syed was a minor when he was sentenced to life in prison in June 2000. Since then, the Supreme Court has said that life without parole sentences for minors are cruel and unusual.

“Two courts have said he deserves a new trial, and then Maryland’s highest court reversed that,” Syed lawyer Justin Brown said. “We think it’s appalling. We think this is a grave injustice. The way this has played out is sickening.”

On appeal, Syed says his trial lawyer was ineffective

Syed argued he was entitled to a new trial because of the deficient performance of his defense attorney, Cristina Gutierrez. By Syed’s telling, Gutierrez seriously harmed his defense because she failed to pursue an alibi witness called Asia McClain. At trial, prosecutors said Syed killed Lee in a Best Buy parking lot between 2:15 and 2:35 pm. McClain claims she talked with Syed in the Woodlawn Public Library during that same period, placing Syed far away from the crime scene at the time of Lee’s murder.

A state court agreed that Gutierrez’s failure to call McClain as a witness was a problem, but concluded it did not ultimately harm his defense. That court nonetheless ordered a new trial, finding Gutierrez should have challenged cellphone location data used to track Syed’s movements on the day of Lee’s murder.

The Maryland Court of Appeals ruled against Syed on a 4-3 vote. The majority emphasized many pieces of evidence established Syed’s guilt, McClain’s testimony notwithstanding. In any event, “the crux of the State’s case did not rest on the time of the murder,” the majority wrote.

Most importantly for purposes of the appeal, the majority said the jury could have settled on its own timeline of the crime — one that differs from the prosecution theory that placed the murder between 2:15 and 2:35 pm. That would make McClain’s testimony less relevant, and Gutierrez’s error less serious.

Before the Supreme Court, Syed’s lawyers said that reasoning was mistaken. By their telling, the Maryland Court of Appeals  wrongly based its decision on a “hypothetical” version of the case. Gutierrez’s performance must be measured against the facts and theories presented to the jury, they argued.

“Courts must evaluate prejudice in light of the case the state actually introduced at trial, not a hypothetical case that sidesteps the weaknesses in the State’s presentation of the evidence,” Syed’s petition reads.

The podcast “Serial” explored Hae Min Lee’s murder over 12 lengthy episodes. The program won the prestigious Peabody prize, and became one of the most-downloaded podcasts of all time. HBO also aired a docu-series on the case.