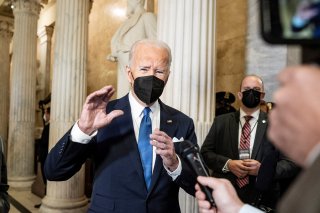 Many experts believe that 2022 will be an expensive year for most Americans as the double whammy of the Omicron variant and the current high-inflationary environment will likely continue to propel even more financial pain.

In fact, according to Jack Kleinhenz, chief economist of the National Retail Foundation, the rapid spread of the highly infectious Omicron variant—which now represents 95 percent of all sequenced cases, according to the U.S. Centers for Disease Control and Prevention—will fuel even more inflation because the American consumer will continue to shop online while cutting down on dining out and traveling.

“Little is certain about Omicron’s impact on consumer demand, but people who stay at home because of the variant are more likely to spend their money on retail goods rather than services like dining out or in-person entertainment,” Kleinhenz wrote. “That would put further pressure on inflation since supply chains are already overloaded across the globe.”

“Even though some (supply chain) bottlenecks have eased, the issues are not fully resolved. And as long as it’s more expensive—and takes more time—to move goods around the world, higher transport costs will likely be passed down to consumers,” she writes.

“Another big contributor is the high cost of commodity prices, leading to surging energy and food costs. Prices in both sectors have soared this year and added a good chunk to the inflation we have already seen. In the case of food, high prices have forced some consumers to buy less or switch stores. Economists don’t expect that to get any better next year,” she adds.

Kleinhenz, though, did note that he does not expect the newest COVID wave to prompt a nationwide economic slowdown or further shutdowns of businesses.

“Each successive variant has slowed down the economy but that the degree of slowdown has been less,” he said.

Too Early to Call?

As new cases have surged across the United States, some businesses like Starbucks, Apple, and Nike have decided to shutter their doors temporarily or shorten hours. Other retailers and restaurants could follow suit as the United States eclipsed a pandemic daily record of more than one million new infections earlier this week, according to data compiled by Johns Hopkins University.

More than 100,000 Americans are currently hospitalized with COVID-19, according to a seven-day average of data released by the Department of Health and Human Services. That number is up by nearly 40 percent from just last week.