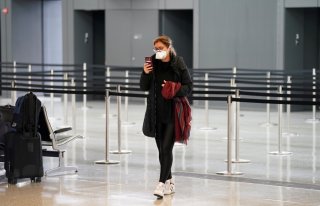 Americans are clearly itching to get out of the house.

A new survey conducted by the German travel research company Trivago has revealed that 38 percent of Americans would go an entire year without sex to travel again.

The poll, which garnered responses from two thousand Americans and Brits between January 3 and 9, further showed that a whopping 20 percent would give up their partner altogether if they were free to vacation where they please.

More than 80 percent chimed in to say travel is a part of a well-rounded life. To that end, nearly half of the respondents would give up their jobs and one-quarter would be willing to wipe out their savings.

About a quarter of Americans and nearly a third of Brits said their goal for their first post-coronavirus pandemic trip would be to spend quality time with family and friends, whom they weren’t able to see face-to-face for months because of COVID-19 restrictions.

For senior citizens, the figures were even higher—35 percent of Americans and 47 percent of Brits.

More than half of the respondents said that they have picked up a new hobby over the course of the pandemic, and once it ends, about two-thirds said that they would probably choose a vacation related to that hobby.

Not surprisingly, the year-long pandemic has been especially brutal for U.S. airlines. Amid stringent travel restrictions across the globe, the six biggest U.S. airlines lost roughly $34 billion—which was worse than the aftermath of 9/11 or the global financial crisis.

Southwest, American, and JetBlue announced that they lost a combined $3.5 billion in the final three months of 2020. As expected, all three airlines—in addition to Delta, United, and Alaska—issued gloomy revenue outlooks for the current quarter.

In what can be viewed as welcome news to the struggling airlines, the U.S. Centers for Disease Control and Prevention is currently not recommending a coronavirus testing requirement before domestic air travel.

“At this time, CDC is not recommending required point of departure testing for domestic travel. As part of our close monitoring of the pandemic, in particular the continued spread of variants, we will continue to review public health options for containing and mitigating spread of COVID-19 in the travel space,” the agency said in a statement.

The guidance comes after Transportation Secretary Pete Buttigieg recently acknowledged that the Department of Transportation and the CDC were considering requiring negative tests for passengers on domestic flights.