Survivability vs. Lethality: How the Army Envisions Future Warfare 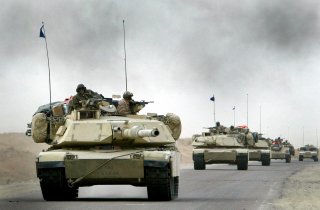 The upgrades to the Abrams tank and the technological sophistication of the new Abrams variants are providing the Army with a larger window in which to analyze the question of whether there will be an Optionally Manned Tank.

These upgraded Abrams variants are capable of countering America’s great-power adversaries for years to come, which means the Army can take its time deciding what its future tank will look like. The Army could present these options to its leadership as early as 2023.

Coffman did not pontificate about what a future platform might look like or might involve in terms of technology. But it would not be surprising if much of the discussion centered around the pace of maturation and readiness regarding lightweight armor substitutes or active protection systems.

There seem to be at least two ways a future tank could be deployable, expeditionary and lethal without compromising survivability. One obvious concept is that it could function as an unmanned vehicle. After all, the potential platform is called the “optionally manned tank,” meaning it could be designed to operate at a high level of autonomy and use heavy weapons while not needing heavy armor to protect a crew. Certainly, an unmanned vehicle could operate without heavy protection as there would be no crew to support it. In theory, this means it could be extremely lightweight yet heavily armed or extremely fast and even air-droppable.  Advanced algorithms that make possible increasing levels of autonomy are quickly emerging. Of course, any kind of future drone tank would need humans to make decisions about the use of lethal force from a distance. Perhaps a future tank will be an armed, high-speed robot equipped with heavy anti-tank weapons operated by a human crew that is miles away in a safer location.

There is another interesting dynamic related to this question of survivability, and it pertains to the question of “sensing” and active protection systems (APS). If APS can learn to detect an incoming anti-tank weapon, tank round, rocket, or even an air-launched attack and destroy that threat prior to any impact, then it could be a paradigm-changing technology. This concept can be traced all the way back to the “survivability onion” concept, which was pioneered during the development of the former Future Combat Systems Manned Ground Vehicles program. It hinges on using sufficiently reliable, precise and impactful sensors and interceptors so that any potential attack would be detected and destroyed before impact.